The availability and affordability of housing across the GTA, and navigating the increasingly cro... 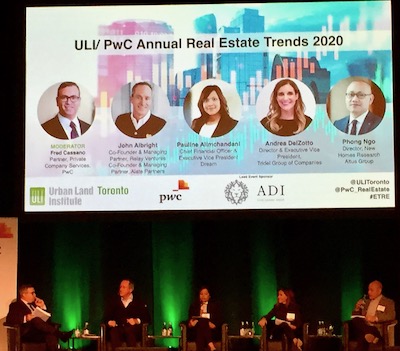 Members of the panel at the PwC/ULI event in Toronto on Oct. 4 were, from left: Fred Cassano of PwC, John Albright of Relay Ventures, Pauline Alimchandani of Dream, Andrea DelZotto of Tridel Group of Companies and Phong Ngo of Altus Group. They tackled emerging real estate issues and trends. (Steve McLean RENX)

The availability and affordability of housing across the GTA, and navigating the increasingly crowded and complex world of property technology dominated the conversation at a PwC and Urban Land Institute (ULI) panel discussion in Toronto.

Altus Group director of new homes research Phong Ngo said the Greater Toronto Area (GTA) housing market slowdown of 2018 has been recovering throughout this year. Single-family home sales in the GTA were higher in the first eight months of 2019 than in all of 2018, year-to-date condominium sales are the second-highest they’ve been since 2012 and resale home sales and prices are up.

Developers have adjusted to align their products and pricing with today’s market conditions and uncertainty has dissipated about government policies affecting new home purchases, enabling people to adjust to the new reality.

“Consumers should know where they stand in terms of what they can afford,” said Ngo.

“I think there’s still a certain segment of the market that’s very price-conscious and really cares about affordability,” said Ngo. “As the industry continues to push towards real estate as a service, it could potentially push out certain people from owning.”

Tridel Group of Companies director and executive vice-president Andrea DelZotto cited a 2018 report that said 42 per cent of millennials plan to leave Toronto because of housing affordability issues.

She thinks co-living, fractional ownership and subscription models may address some of those concerns.

Co-living is a form of housing where residents have individual space in a shared property. With fractional ownership, people own part of a residence and can use it for a specific amount of time every year.

Subscription models involve individuals paying a weekly or monthly fee, just as they’d pay rent. They’re able to sign short-term leases and, at the end of them, can move to another location.

“There’s a pay-per-use mentality where people only want to pay for what they use,” said DelZotto.

Land and real estate are becoming irreplaceable because it’s hard to acquire and get the necessary zoning approved.

“A lot of the sites that we would have historically planned for condos are now planned as purpose-built rentals,” she said. “That’s a big shift from when we went public just a few years ago.

Dream has about 10,000 housing units and two million square feet of commercial space in its pipeline and plans to own it long-term, according to Alimchandani.

With a rental apartment vacancy rate of around one per cent and a growing population, Dream believes the rental market should thrive in Toronto for years to come.

Increasing construction costs and labour shortages are viewed as threats to developers. Ngo said the average age of a construction worker is 42 and rising, and some of the workforce will soon be lost to retirement.

“Fifty per cent of the total construction labour in Canada is distributed across housing, renovation and maintenance, with 18 per cent in industrial, commercial and institutional,” said Ngo.

Ngo believes there’s a stigma to construction work that needs to be addressed through a concerted joint effort between governments and industry to attract more people to enter the trades and then train them.

“It’s not just a matter of trying to fill the gap. It’s filling that gap with skilled people, which is a challenge as well.”

DelZotto said Tridel is involved with different programs to try to increase the amount of people in the construction trade and is also documenting information from tradespeople so newcomers better understand the jobs.

“The stigma is definitely there, but careers in construction don’t necessarily mean you’re working on a job site anymore. There are so many opportunities.”

DelZotto is hopeful new construction technology will continue to advance in 2020 and help reduce costs.

Cassano said there are 6,800 companies tied to property technology (proptech).

He’s also the co-founder and a board member of Alate Partners, which connects with companies developing technology to reimagine how buildings are designed, built and managed.

Albright is primarily investing in startups in New York City, Chicago, San Francisco and Toronto. In the GTA, he said salaries for engineers and others in the tech field are going up but are still lower than in the United States.

“Toronto is thriving more than any other North American city right now and the amount of capital that’s now coming from the U.S. to startups in Toronto has never been higher.”

Albright said proptech is driven by entrepreneurs and has been under-invested for many years.

However, the yield and return on proptech investment can be significant. Individuals and large companies are now putting capital into startups in the sector to find ways to reduce costs and increase productivity and tenant engagement.

Alimchandani said Dream is capturing and analyzing data to better understand who’s using space and how.

The company has partnered with Relay and Alate to benefit from their proptech expertise because there are so many companies and products it’s hard to identify the best solutions for Dream.

DelZotto admitted Tridel needs more internal technology expertise. She said the implementation of new technology has made cyber-security a concern and is “adding a layer of vulnerability,” but also providing opportunities.

“Nobody really wants to talk about cyber-security, but if we share our experiences we’ll be better equipped to deal with it,” she said.