PROREIT closing in on deals

PRO Real Estate Investment Trust (PROREIT) has completed a $29-million equity offering and is using some of that money to acquire 11 Canadian commercial properties for $58.3 million. 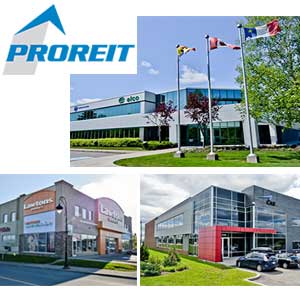 “They fit the REIT’s current strategy of acquiring diversified properties focused in eastern Canadian markets with quality tenants and lease terms on a basis that is accretive for all unitholders.”

“The portfolio will increase and diversify the value of PROREIT’s investment properties by approximately 30 per cent over the $202 million recorded at June 30,” said Beckerleg.

“We have a general objective target of seeing assets exceed $500 million over the next couple of years, which will allow full internalization of management and attract greater institution following.”

The proposed acquisitions include nine retail properties totaling 290,000 square feet and comprised primarily of grocery-anchored and other necessity-based retail outlets. There’s also a 171,000-square-foot industrial property and a 50,000-square-foot commercial mixed-use property. Six are in Quebec, four are in Nova Scotia and one is in Prince Edward Island. They have a combined 99-per cent occupancy rate and a weighted average remaining lease term of 8.6 years.

PROREIT has entered into conditional agreements for six of the properties with three separate vendors. It has also executed letters of intent with two separate vendors that are related parties of the REIT for the five other acquisitions.

Montreal-based PROREIT has also identified five of its properties that offer expansion potential with both existing and new tenants, including the fit-out of currently vacant space and future pad development. It intends to use approximately $1 million of the proceeds from the offering to fund construction costs associated with these projects. PROREIT estimates that they’ll generate an investment return of more than 20 per cent.

PROREIT, which was established in March 2013, has a market cap of $91.65 million on the TSX Venture Exchange. Beckerleg sees reaching $100 million as “one of the psychological market hurdles which affirms the REIT’s market presence and attracts a broader range of institutional and retail investors.”

Beckerleg believes that PROREIT’s financial performance has been in line with expectations and that its units are trading at very attractive levels for investors.

“We are currently gratified to see the substantial increase in trading volumes for our units involving a much broader range of investment dealers,” he said. “Our recent syndicate involved chartered banks and several independent dealers.

“Our units are now followed by two analysts and we are hopeful other analysts will pick up coverage over the coming months. We believe all of this should enhance our unit price performance compared to our peer group.”