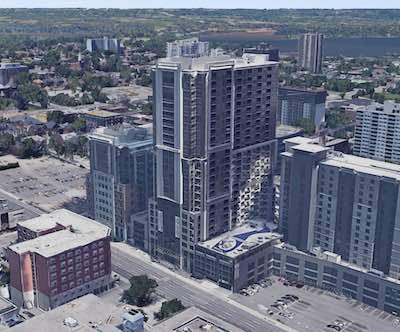 The Regency on Main apartment tower in Hamilton. At right is the adjacent hotel, attached by a podium. (Google Maps)

The three buildings, which are of various ages and sizes, contain a total of 750 units, Altus Group reports in a listing of recent transactions. They were purchased from ICBC and Starlight.

The sales closed in April, well after the onset of the COVID-19 pandemic, which put a hold on many major CRE and apartment transactions. Details were never publicly released, however.

The properties involved in the transaction are:

Regency on Main in Hamilton

The Main Street property in Hamilton, known as Regency on Main, is a new build which is part of a two-tower complex attached to a Homewood Suites by Hilton. The towers are connected by a podium which encompasses a significant portion of the downtown block and also fronts onto Bay Street.

It’s just a few blocks from Highway 403 and a short distance from the waterfront, Jackson Point and the recreational trails system, as well as shopping at Jackson Square.

The Regency on Main apartments range from one to three bedrooms, with floor space from 567 to 1,672 square feet.

The building includes an extensive list of amenities, from a fifth-floor rooftop terrace and BBQ facility to fitness centre, lounge with fireplace, a 4K cinema, pool, storage lockers and 10-foot ceilings in the units.

Starlight had purchased the property on a forward-sale agreement from the developer in 2017.

245 Lena Cres. is part of a two-tower apartment development adjacent to a major commercial strip along Hespeler Street. It’s located directly across the road from the Cambridge Centre shopping mall.

The building was constructed during the 1980s.

1505 Ottawa St. N. is an eight-storey mid-rise building in a suburban neighbourhood in the east end of Kitchener, near the city’s boundary with Cambridge.

It is located beside a large green space which backs onto the Grand River, and across the road from a food store and strip mall.

Extensive community amenities including schools, sports fields and a community centre containing an arena and library are a short walk away.

A spokesman for Starlight said the company cannot comment on the transaction due to confidentiality restrictions. No one from QuadReal was immediately available to respond to an inquiry from RENX.

According to sale documents, the Cambridge property sold for $99 million, while the Kitchener property was $59 million. The Regency on Main apartments were $142 million.

However, several apartment transactions have completed through the early months of the pandemic, and SVN Rock Advisors CEO Derek Lobo said during a recent webinar more deals can be expected in coming weeks and months.

A major part of the reason is that the sector has continued to perform well despite extensive economic shutdowns, and rent collections have not been impacted nearly as severely as many owners feared.

Lobo said large institutional investors will be revaluing and rebalancing portfolios, which had could lead to additional activity.

“Partly because apartments came through this period – we’re certainly not through it by a long shot– but apartments have done well, better than almost anybody expected.”

BCI is one of Canada’s largest asset managers with a $153.4 billion portfolio.

Lobo said there is likely to be a period of “euphoria” as economies reopen, jobs return and people can begin returning to a more normal daily life.

“People are going to be happy when this occurs and virtually every conversation I’ve had with almost anyone, they’ve said, ‘Now Derek I am sitting and dry powder and I’m looking for bargains. Bring me some deals.’

“I’m really not sure there are going to be many deals out there and (there are) certainly going to be very few in the apartment centre. But, we have picked up a number of listings in this 10-week period because we’ve been very active.

“We are going to be bringing out probably five buildings for sale in the next little while.”