The Quebec model in which affordable rental housing is offered to seniors is starting to see trac...

The Quebec model in which affordable rental housing is offered to seniors is starting to see traction in the rest of Canada, conference-goers at the recent Quebec Apartment Investment Conference in Montreal were told. 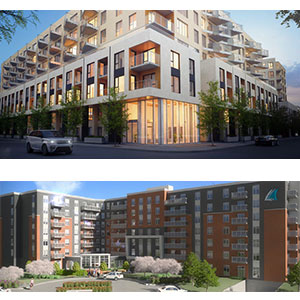 Some 330 units of affordable housing for seniors are being built in Toronto that model closely the type of rental homes for seniors in Quebec, says Maxime Camerlain, vice-president of marketing at Chartwell Retirement Residences (CSH.UN-T).

He was one of the speakers at a session on innovations in rental development.

Quebec has almost half of the nearly 220,000 private residential housing spaces for seniors in Canada, the highest number in the country, according to 2014 CMHC numbers. The units serve seniors who are mainly autonomous or have only slightly reduced autonomy.

Affordability is a signature calling card for seniors’ rental housing in Quebec: According to 2016 CMHC numbers, the average monthly rent across the province is $1,626 compared to $3,499 in Ontario. In addition, unit counts are typically higher in Quebec and there are fewer services.

However, even if rents are lower in Quebec, the latest generation of seniors is willing to spend for quality rental housing, says Francis Charron, vice-president of real estate developer Batimo, which partners with Chartwell to develop seniors housing. “You have to be very attentive to their needs.”

“The baby boomers are the first generation that will spend its money on itself,” Charron says. “Their thinking goes, ‘I already gave my kids their educations. It’s time to spend my money.’ ”

Previous generations preferred to spend 75 cents on the dollar with the rest going to their kids. But the current generation is willing to spend the entire amount on itself and is seeking such “musts” as soundproofing, he says.

More rental than condos in Montreal

More rental units are being built in Montreal than condos (52 per cent) for the first time in years, says Benoit Poulin, senior vice-president at CBRE.

No matter the type of rental housing, people are looking for services nearby which is why Chartwell seeks sites for new projects within 500 metres of a grocery or pharmacy, Camerlain says.

Some developments are attempting to incorporate such services within their buildings. Arbora, a 450-unit mixed-used project in the Griffintown neighbourhood of Montreal at a cost of $130 million, will include a bakery and pastry shop, says Annie Lemieux, president of development firm LS4/LSR GesDev.

Panelists at the session agreed increasing land costs are forcing developers of rental housing to be more creative. Many are coming up with mixed-use projects that maximize density in order to make the land prices viable.

LS4/LSR GesDev’s Arbora, for example, will include rental units, condo and townhouses. It’s one of the first buildings in Quebec to be built with a solid wood frame made of cross-laminated timber panels.

The environment for new rental housing in Quebec is “extremely competitive,” Camerlain adds. “Time to market is an issue. You have to plant your flag.”

Given the time-to-market issue, “you have to be in the right place at the right time,” Charron says. And developers can’t rest on their laurels. “You’re only as good as your last successful project,” he says.