A luxury $125-million condominium project in Montreal’s Quartier des Spectacles entertainment district is attracting empty nesters and international buyers seeking a pied-à-terre with its promise they won’t “miss any of the show.” 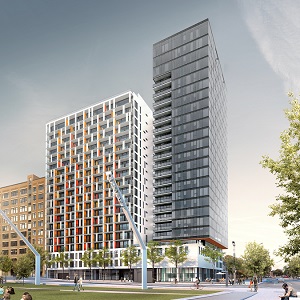 Phase II of Rachel Julien’s Laurent & Clark project – so named as it is located between Clark Street and St. Laurent Boulevard – has kicked off with 175 condos in a 25-storey glass tower. It joins Phase I, a 159-unit, 21-storey tower that launched last May and is more than 95 per cent sold.

“The project was envisaged for several years,” notes Mélanie Robitaille, vice-president, finances and development at Rachel Julien. “It’s one of the best pieces of land left in the centre of Montreal.”

Robitaille says that since Laurent & Clark is located in the Quartier des Spectacles – home to a host of events from the Montreal International Jazz Festival to the Just for Laughs comedy festival – the westward views of downtown provided to unit owners will never disappear.

“The views are unequalled in this project. Rare are the projects in the city that can boast of having an entirely clear view toward the west that our project has.”

Laurent & Clark overlooks one of the stages in the Quartier des Spectacles and will face an outdoor skating rink in the winter.

The project is one of several large residential developments the 35-year-old Rachel Julien has on the go in Montreal.

Aside from the Laurent & Clark project, Rachel Julien is developing U31, a 320-unit, three-phase condo project in the Rosemont-La-Petite-Patrie borough, comprised of U-shaped, six- to-eight-storey buildings. It’s also building the 20-storey Bassins du Havre next to the Lachine Canal.

Robitaille says a solid economy and low unemployment rates have made the market attractive once again.

She adds taxes imposed on foreign residential home buyers in Toronto and Vancouver have also made Montreal a refuge for some of these buyers.

Rachel Julien has delivered some 4,000 condo units in its history. The developer first began constructing small buildings of four storeys or less and in the 1990s converted several Montreal churches and schools into condos. Rachel Julien is named after two of the street corners where one of the conversions took place.

Robitaille says Rachel Julien has a team of 50 employees, and does much of the work internally – including sales, design and after-sales service.

“We control pretty much all of the steps involved in the process. That gives us an enviable client satisfaction rate.”

That philosophy is at work at Laurent & Clark, where Phase I is scheduled for delivery in 2019. Construction of the second tower should begin sometime in 2018, depending on sales, with completion in winter 2020 or 2021, Robitaille says.

Average buyers to date are 49 years old, majority francophone, about half are single and most frequent downtown for work and play. A significant number – about 10 per cent – live abroad, primarily in France, but would like to have a Montreal pied-a-terre, she says.

Robitaille expects a similar profile for buyers for the second tower but wouldn’t be surprised to see a slight increase in foreign interest. “It’s an ideal project for this type of clientele.”

Average square footages in the second building are slightly lower than in the first. Prices in Phase II range from $173,000 for a 287-square-foot studio to $834,000 for a 1,363-square-foot, three-bedroom, taxes not included.

Aside from the entertainment focus in the Quartier des Spectacles, the city of Montreal is putting a focus on residential development in the area.

It will feature a fourth-floor lounge, with a games room and a dining room that can be reserved for private receptions, along with an exterior terrace to watch the shows below during festivals.

For condo owners seeking a respite from the festival noise, sound insulation will exceed the norms.

There will also be a “gigantic” spa of more than 2,000 square feet with 20-foot ceilings and various thermal stations. “We decided to focus on a spa rather than a pool because we surveyed our customers and found this was their preference,” Robitaille says. “Indoor pools get very little usage.”

Laurent & Clark is just a few metres from the Metro and the project will include five floors of underground parking, with unobstructed access during festivals.