The Reach is up for grabs in Kamloops

The Reach at Thompson Rivers University (TRU) in Kamloops will be the first planned community on a campus in British Columbia’s interior, and there’s healthy interest from developers to build its first phase. 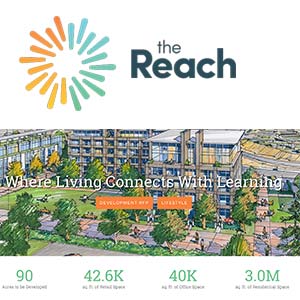 “We have 90 acres of greenfield that’s in the middle of Kamloops, is serviced, and is a five-minute drive to downtown on the edge of a big commercialized area,” said Finlay Sinclair, president and chief executive officer of Thompson Rivers University Community Trust (TRUCT). “We think it’s a huge opportunity for a developer who wants to look at a new, mid-sized market.”

TRUCT was created five years ago to manage development on TRU property that will transform university land assets into a source of dedicated funding to support TRU students and academic activities since B.C. universities can’t be developers or have for-profit businesses coinciding with their charitable status.

“We become the real estate arm and we zone it, service it and take the development rights to the market,” said Sinclair. “All the net profits that the trust earns are returned to the university or the Thompson Rivers University Foundation to benefit students, researchers and academia in general.”

Ninety of TRU’s 250 acres of endowment lands have been deemed to be excess to academia and available for residential and commercial development. TRUCT is now offering rights for residential development for its first one-acre parcel of land on a 99-year lease. This first phase of the master-planned community is already connected to TRU’s existing water, sewer, utility and road network.

It’s anticipated that The Reach will eventually feature three million square feet of market-priced townhomes and/or mid-rise condominiums, as well as a student housing component.

“We’re not attempting to draw any tenant from their existing building or space in Kamloops,” said Sinclair. “If somebody wants to open a second location or start new, that’s fair enough, but we’re not interested in people moving from downtown to our site.”

The Reach has prime Kamloops location

The Reach offers prime river views and will incorporate outdoor public spaces connected by pedestrian and bicycle paths. The transit-friendly neighbourhood is surrounded by an 800-hectare park and a large commercial district is a five-minute drive away.

Kamloops is a city of just under 100,000 in south central B.C. at the confluence of the North Thompson and South Thompson rivers near Kamloops Lake. It’s a stable housing market that’s experienced a steady increase in absorption and prices in recent years, according to Sinclair, who has received interest in The Reach from both familiar developers and those previously unknown to him that are interested in the opportunity.

“The winning proposal’s going to be from a company whose values and building experience and history fit with the values of our trust and the university,” said Sinclair. “The ability to understand Kamloops and the interior of British Columbia real estate market will be core.”

The closing date for submitting proposals for The Reach’s first phase is Oct. 21. TRUCT will take a few weeks to make a decision on what company it would most like to work with, and it’s hoped that negotiations can be completed by the end of the year. Sinclair would like to see construction begin early in 2017 and he expects completion to take about 18 months.