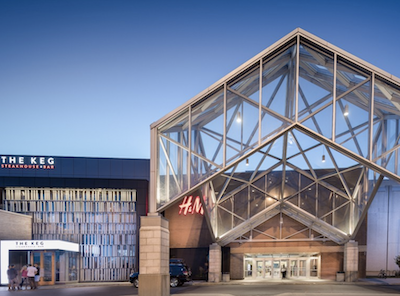 Project Fairview will surround the 52-year-old shopping mall at the corner of Highway 40 and St-Jean Boulevard, which itself is already getting a makeover.

“The idea there is that we’re not repurposing what Fairview Pointe-Claire was. We’re advancing it,” said Terry Fraser-Reid, vice-president, development at Cadillac Fairview. “It was always the downtown and it’s going to be the new downtown – responding to what people are looking for and what people want from their suburban downtowns.”

The project will include a mix of condos, stacked townhomes, townhomes, hotels and other uses on land surrounding CF Fairview Pointe-Claire. It will be a TOD (Transit Oriented Development) as the property will be the site of a new REM light-rail train station.

It was just one of several mixed-use projects discussed at a session on mixed-use and intensification projects underway in the city at the Montreal Real Estate Forum on April 17.

Cadillac Fairview and mall partner Ivanhoé Cambridge have already announced a $30-million renovation of the shopping mall that will include new lighting, floors and exterior entrances.

In addition, the former three-storey Sears store will become a two-storey Simons store, with the ground floor being transformed into a new food hall. The current food court will be demolished and replaced with new stores.

The mall renovations should be completed by next summer.

Fraser-Reid added Cadillac Fairview is about halfway through development of its 4.1-million-square-foot Quad Windsor project in downtown Montreal. He said the development provides an “exceptional’ opportunity to build a major, mixed-use land assembly project in an urban environment.

“I think what’s exciting about a project like this is you’re not starting with a blank slate,” Fraser-Reid said of Quad Windsor.

“You are trying to install something, a grand vision, a lot of complex uses, into an environment that’s already very much established. If you’re doing it right, you’re making a lot of connections (with) everything around you.”

Francis Charron, president of Batimo, discussed his 1111 Atwater development, the latest component of the Square Children’s mixed-use development on the site of the former Montreal Children’s Hospital.

The 38-storey 1111 Atwater, at Atwater Avenue and René Lévesque Boulevard, includes 22 luxury condos on the upper floors, 322 units for independent seniors and a commercial component.

“If somebody in the room told me a year ago that one day you would sell at $2,000 a square foot for a project in Montreal . . . I’m an optimistic guy by nature, but I don’t think I would have believed you.”

Charron said the seven towers that make up Square Children’s are being built together, which proves the current dynamism of Montreal. “We know that Montreal is on fire right now in the good sense of the term.”

He noted 1111 is 95 per cent in Montreal and five per cent in Westmount which has added to the project’s complexity as it means dealing with regulations, permits and committees in two cities.

“My grey hairs that are starting are from the five per cent,” he said.