Given that 2016 marked the 25th anniversary of the Toronto Real Estate Forum, it seemed appropriate that it ended with senior real estate and investment banking executives looking back at the past quarter-century while forecasting what’s to come. 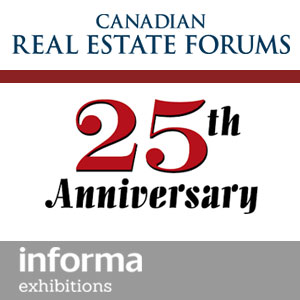 RBC Capital Markets chairman and chief executive officer Doug McGregor said there’s as much development talent in Canada as anywhere in the world, and that the biggest Canadian real estate trends he’s seen over the past 25 years have been “recycling trophy assets from banks to pension funds” and the growth of real estate investment trusts.

“We have not had bad management in the REIT industry. People have been careful and haven’t taken on too much developer risk and have been careful with their distributions. It’s worked out very well and they’ve treated investors well.”

While Canada Pension Plan Investment Board senior managing director and global head of real assets Graeme Eadie also praised developers and what they’ve built, he said he missed “the old style developer that only saw an up side and never saw a down side. There’s some great talent now, but it’s more institutional.”

Dream Unlimited Corp. president and chief responsible officer Michael Cooper said Canada’s real estate industry between 1992 and 2010 “was about buying things really cheap and having interest rates go down.” The industry has recreated itself since then, he insisted.

‘We’re all doing everything we can to make sure our balance sheets can handle anything bad that happens,” said Cooper. “It’s a very competitive market, but I’ve never seen the industry doing better things than it is right now.”

Impact and disruption of technology

Hutcheson asked about the impact and disruption of technology, and both First Capital Realty Inc. chairman Dori Segal and RioCan REIT CEO Ed Sonshine — who oversee large retail portfolios — said they’re dealing with the effects of online shopping by placing a greater premium on tenants like restaurants, gyms, beauty salons, health providers and other companies providing services that aren’t affected by the Internet.

“A lot of the medium box retailers are getting smaller,” explained Sonshine. “Staples sells 50 per cent of their goods through e-commerce and doesn’t need 25,000-square-foot stores.

“That can also be applied to electronics and book stores. Book stores aren’t going away, they just need a lot less space to sell their books.”

“People aren’t using bank branches the way they were, so we’re trying to retool what people can do from a branch,” said McGregor in explaining how the Internet has affected the way Canadians have been dealing with banks since the Bank of Montreal was the first to receive a charter in 1817.

“Don’t plan on leasing a lot more physical spaces to us because there are going to be a lot fewer branches opening in Canada over the next several years.”

Fittingly, given the 25th anniversary of the Real Estate Forum, founder and Informa Canada vice-president of real estate/construction George Przybylowski was called on stage and honoured with a humorous video tribute to close the event.