While the presence of women in C-suites and boardrooms in the Canadian real estate industry is even more rare than in the rest of the Canadian corporate world, steps are slowly being taken to remedy the situation. 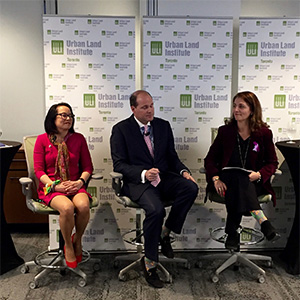 “But I have been a huge champion of both inclusion and diversity and I’ve watched the company evolve over nine years, and I know as a fact that we make better decisions when we have a diverse group in the room,” Hutcheson added at an Urban Land Institute (ULI)-sponsored panel discussion at Deloitte’s downtown Toronto offices on March 8, International Women’s Day.

“If 69 per cent of senior executives think it’s important, when it was 59 per cent a few years ago, it’s going to be 99 per cent in a few years,” said Hutcheson.

The report goes on to claim diversity also: fosters workplace innovation; provides a positive effect on a company’s culture; improves the ability to capture and retain a diverse client base; enhances an organization’s ability to acquire new talent; and builds an organization’s brand externally.

The question of quotas

The Canadian government is promoting a target of 30 per cent of board memberships to be female by 2019. While the panelists support setting targets, none are fans of quotas.

“There are other buttons to push besides quotas, and we don’t push all of the buttons,” said Metrolinx chief planning and development officer Leslie Woo, who tells recruiters they’re not bringing in a sufficient number of women as potential employees.

Toni Rossi, president of Infrastructure Ontario’s real estate division, said public sector real estate companies are leading private sector companies in diversity inclusion. She wants to share what’s being done at her crown corporation, which has a near 50-50 male-female split in its executive team and board, but needs to do more at the mid-management level from a gender parity and diversity perspective to ensure that will continue at higher levels.

“We’re very proud of the work that we’ve started to do, but we’re nowhere near done,” said Rossi. “We often say that we’re proud but never satisfied.”

Michael Brooks, CEO of Real Property Association of Canada (REALPAC), represents 96 large public and institutional investment real estate companies. He said he realized at the 2016 Real Estate Forum that REALPAC wasn’t adequately promoting gender equality. It then put together an advisory council chaired by Hutcheson to come up with best practices and look at the levers the association has at its disposal to influence its members to try and turn things around.

REALPAC does a large compensation survey and has created a new set of questions around gender to come up with more and better numbers.

“We’ll be able to track how things are changing,” said Brooks. “Data is both a challenge and an opportunity.”

Brooks also teaches a real estate course at Ryerson University that has 72 students, composed of about 40 per cent women and 60 per cent visible minorities. He said the current largely white male makeup of boards and executive teams “doesn’t send a reaffirming message about the future and what your opportunities are.”

They include: a mentorship program to create opportunities for advancement; the Championship Team, which was created in 2014 to profile female real estate experts and leaders and recognize their talent; and the Women On Boards series of three workshop-style lunches aimed at helping women become board-ready.