Members of the real estate industry met with government representatives last month to discuss challenges regarding the settlement of Syrian refugees in Canada. 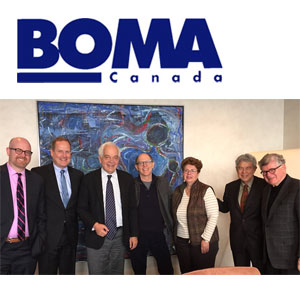 “The meeting was hosted by The Mosaic Institute, which had a refugee program called Humanity Wins and spun off Humanity Houses as a way for the CRE industry to give advice to the government on how to house the 25,000 Syrian refugees,” said BOMA Canada president and chief executive officer Benjamin Shinewald.

Among the other participants were: Randal Frobelius of Equity ICI Real Estate Services Inc.; Minister of Immigration, Refugees and Citizenship John McCallum; Mitchell Cohen of The Daniels Corporation; Hanita Braun of Verdiroc Development Corporation; Robert Eisenberg of York Heritage Properties; and former employment and immigration minister Ron Atkey, who was instrumental in the federal government’s decision to grant 50,000 Vietnamese “boat people” asylum in 1979.

“The meeting was an off-the-record session with Minister McCallum and his chief of staff where we provided all manner of advice to him, from how to house refugees to how to employ refugees in our industry,” said Shinewald.

“We covered topics like the challenges of finding vacancies in large cities, the opportunities in smaller communities, and the gap between housing costs and refugee budgets.”

Many refugees still in hotels

Some Syrian refugees who have already arrived in Canada are still staying in hotels while waiting to get into more permanent affordable housing.

Settlement agencies in major cities across the country have struggled to find adequate housing for the thousands of government-sponsored refugees and asked for a temporary delay in accepting new ones.

This has resulted in some new arrivals being diverted to smaller centres in places such as New Brunswick, Quebec and Saskatchewan.

Houses on several military bases across Canada have also been renovated and upgraded to accept refugee families, but haven’t yet been used.

BOMA Canada has been in touch with the minister’s office since last month’s meeting and connected McCallum’s staff to more people in the real estate industry for further discussions.

“Many industry leaders are matching vacancies with refugee arrivals and are even discounting rent for newly arrived refugees,” said Shinewald. “There is a real willingness to do our part.

“On the employment side, we believe that there are opportunities in our industry, especially on the supplier side . . . though it is likely that the refugees first need to settle in Canada, find schools for their kids, learn English or French, and get accustomed to the new way of life.

“We hope and expect that, in a year or so, we may start to see some of them employed in our industry.”