Closed-end funds are the deep sea creatures of the real estate world. Somewhat mysterious, rarely catalogued or reported on. 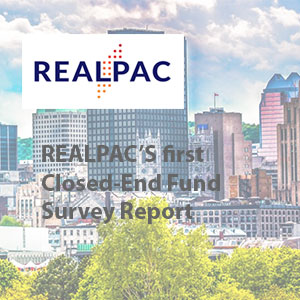 REALPAC has shed some light on the murky sector with its inaugural closed-end fund survey.

Although hardly encyclopedic – the real estate association hopes to expand its effort in coming years – it portrays an under-exposed segment of the industry that is truly enormous.

“The total of assets of management, just from the first year respondents – we haven’t got everybody, over $18 billion in this little survey (of) 11 participants.”

To put that into perspective, he noted, that’s the combined market capitalization of REIT giants RioCan, H&R REIT and CAPREIT.

“We haven’t got everybody by a long shot,” said Brooks, who estimated that the sector might be as big as $25 billion, which would be about one-third of the entire TSX real estate sector.

And no one has really looked at the sector. “We want to do this annually. They are doing it elsewhere in the world and frankly we are behind in Canada in understanding this market and making some information available to participants and investors.”

Even real estate insiders will likely raise their eyebrows. “It is very opaque this business, you don’t read about it in the Globe and Mail every day.”

Brooks does not expect future reports to capture all the information potentially of interest to real estate investors. “We still don’t know and it will probably be very difficult for us to get fee information and return information. How much are these funds earning for their investors and what fees are they charging? It is still a very private community.”

There are a surprising number of closed-end real estate funds, which generally have a sunset clause dictating a lifespan for the fund.

REALPAC’s report said nearly half of the participants have more than $1 billion in total value of assets under management. They were also active and successful in seeking investors, raising between $100 million to $500 million range in 2015.

Closed-end players are active fund giants and REIT operators who are familiar to the commercial real estate industry.

“They are in the press and you know their names but they certainly don’t blow their horn and they like to operate below the radar.”

While their individual investment approaches varied, the study found that a “majority of funds prefer a value-added strategy but a large portion of funds elected a mixed strategy with a high emphasis on value-added and opportunistic components.”

“So they are taking equity money and then they are also going to the bank and borrowing money. That might be construction financing, that might be interim financing. That is probably helping their returns and it tells me these funds are prepared to be aggressive,” concluded Brooks.