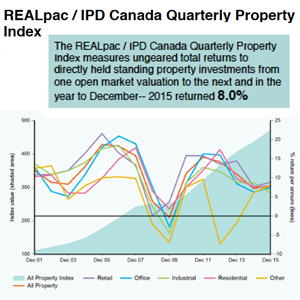 Predatory companies, mainly U.S. big-money investors, have been attracted to the scent of blood in Canadian real estate markets and are poised to pounce, Darren Warren, assistant vice-president with Lincluden Asset Management, noted at the REALpac/MSCI Real Estate Investment Forum.

“The amount of rumours we hear about large Canadian REITs being taken out, rumours about RioCan (REI.UN-T), rumours about CAPREIT (CAR.UN-T), that foreign money is going to come in and take advantage of our weak dollar and scoop up our top REITs, let alone the smaller ones, is accelerating.”

Waiting on the Calgary opportunity

Warren, along with Avison Young chief executive Mark Rose, noted the industry focus is currently on energy-depressed Calgary, where buyers and sellers are engaged in a waiting game and both sides are looking for signals on pricing with no major deals yet consummated.

“There is definite hovering now,” said Warren. “I am talking to my American peers and they are sending their associates to ride taxi cabs in Calgary, asking people how the economy is.”

Rose said something has got to give in the gut-punched province.

“Calgary is the place that folks are starting to hover for the opportunity. But the opportunity again doesn’t present itself until you have the final capitulation which has not happened,” Rose said.

Rose added companies are better capitalized than in previous downturns.

“We have been through cycles, teams in place are stronger, so everyone has been able to weather what has been going on with falling energy prices better than they have in the past.”

Rose added a number of companies are “teetering” and it might be good for them to fall.

“I’m going to get yelled at, but if there could be both a couple of energy companies and real estate owners who do fall, it would actually be a blessing for the market because then the market would reset itself,” Rose said. “There is a flood of capital waiting to come in.”

Last week, Bloomberg reported Winnipeg-based Artis REIT (AX.UN-T), which has loaded up on Alberta real estate in recent years, hired the Bank of Montreal to help its “sell some or all of its Calgary office properties.”

Such a sale might effectively be the first “capitulation” Rose and others are waiting on, a situation that could provide some price discovery for property in the province and the oil-focused city. Artis has not commented on the report.

Michael Brooks, president of REALpac and moderator of the panel, noted many real estate players agonize about portfolio balance and some loaded up on Alberta real estate when the province was booming.

Chasing results, market timing or worrying about sticking to asset balances is apparently not something that concerns Canada Pension Plan Investment Board.

“We don’t worry about the rigid asset allocations within the CPPIB, whether it be inside Canada, outside of Canada or within Canada geographically, or even asset classes,” said Sharm Powell, a director of the pension fund.

With that said, CPPIB’s asset weightings  “are not that far off” those of its peers in the REALpac/IPD report. Its real estate holdings work out to about 30% retail, 20% office and 11% for each of multi-residential and industrial.

“We have not been active in the hotel sector or some of the other alternative classes although more recently we have got into student housing, not in Canada but outside, and also some health care,” said Powell.

“But within Canada we really like retail, office in the major markets, Toronto, Vancouver and Calgary. And until a year ago we always felt that we were underweight in Calgary.”

The properties CPPIB is interested in within Canada’s energy capital are “institutionally owned, they are not under the threat. But we certainly would not shy away from that market if we found the right opportunity, the right partner.”

Oh yes, the report. REALpac partner MSCI Inc. reported an eight per cent total return in 2015 for Canadian property, “a slight improvement on the 2014 result of 7.3%.”

The retail sector continued to lead the Canadian market with an 8.8% total return and industrial lagged behind with a 6.0% total return.

Toronto and Vancouver were the top performers, returning 12.8% and 12.5% respectively.

Canadian investors continue to invest in the asset class with more than $5.57 billion of asset value being added to the REALpac/IPD Canada Quarterly Property Index during the year.

“The 2015 results reflect the value investors place on the consistent income produced by direct real estate.”