Residential, industrial, commercial and institutional land sales in the Greater Toronto Area (GTA) set a record high at more than $2 billion in the second quarter of 2016. 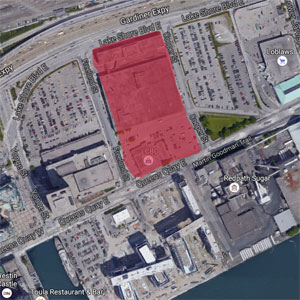 All real estate transactions for the quarter in the GTA totalled $5.2 billion, the second highest volume for a quarter since 2007 and led only by the fourth quarter of 2015.

“Mark Twain said it best: ‘Buy land – they’re not making it anymore,’” said Shawna Rogowski, director of Altus Group Limited, which compiled the data. “Together with the continued strength of the commercial real estate market, it proves to be a valuable investment.

Rogowski added that rising land prices are contributing to increased density and higher buildings in the GTA as “everybody is trying to get the most bang for their buck.”

The biggest land transaction in the quarter was the sale of the Liquor Control Board of Ontario (LCBO) lands at the northeast corner of Queens Quay East and Freeland Street, one block east of Yonge Street. A total of 10.78 acres were purchased for $260 million from the Province of Ontario by Menkes Developments in partnership with Greystone Managed Investments and Triovest Realty Advisors. It also purchased two additional properties from the City of Toronto for a total assembly of 11.35 acres (shown in image above).

An application has been made for the development of seven mixed-use buildings that would comprise more than 4.7 million square feet of retail, office and residential space as well as a two-acre public park. The construction of the office tower where the LCBO will be a tenant is projected to start in the fall of 2017, with completion expected in the first quarter of 2021.

Sales activity in other sectors

The GTA office sector recorded double the 10-year average volume, with the sale of a 50 per cent interest in Scotia Plaza by Dream Office REIT and H&R REIT to Alberta Investment Management Corporation and KingSett Capital for $654.5 million representing nearly half of the total volume of office sales.

The retail sector experienced an active quarter with the closing of 149 transactions, including the sale of Woodbine Centre to a private investor for $104 million, as well as RioCan REIT teaming up with Tricon Capital Group and Diamond Corp. to acquire retail outlets and a block of land in midtown Toronto near the Summerhill subway station for $85 million from Woodcliffe Landmark Properties.

The top industrial transaction in the GTA was the sale of the Sears Canada national distribution centre at 9501 and 9601 Highway No. 50 in Vaughan to Metrus Properties for $100 million. The two buildings total almost 995,000 square feet and will be leased back to Sears. The deal is the largest yet in Sears Canada’s sale of non-core real estate as it looks to improve its balance sheet.

The former Mr. Christie bakery site at 2150 Lake Shore Blvd. W. was sold by Mondelez Canada to First Capital Realty and the Canada Pension Plan Investment Board for $52 million.

The biggest residential deal in the GTA was the sale of an apartment building at 1440-1442 Lawrence Ave. W. to BayBridge Seniors Housing for $46.25 million.

The largest hotel transaction was the sale of Novotel Toronto Centre to Silver Hotel Group for $54 million.