The Buggles famously sang “Video Killed the Radio Star” but streaming hasn’t put the final nail in the bricks and mortar music business just yet. 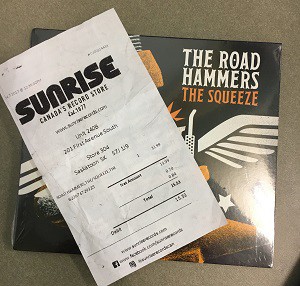 Homegrown Canadian company Sunrise Records has stepped into the breach since the departure of HMV. (Kelly Macsymic photo)

It looked like the end was near when HMV Canada announced it would be closing all its stores, but homegrown Sunrise Records has stepped up to fill the musical consumer gap.

If it seems like Sunrise came of out of nowhere, it’s because they did. An independent record store since 1977, Sunrise Records was purchased by Doug Putnam in 2014.

Putnam comes from a family-operated toy and game manufacturing business based out of Ontario called Everest Toys.

When Putnam purchased the chain of record stores, the previous owner had shuttered many stores, already laying blame on higher rents. Putnam not only believed in the value of physical music sales, but he was able to rejuvenate the brand.

Sunrise Records expanded to nine locations before the HMV opportunity arose. The company has absorbed 70 locations across Canada — including two in Regina and two in Saskatoon.

Putnam said part of the plan to make the acquired locations viable was renegotiating rental rates and other terms.

With almost all of the vacated HMV locations situated in enclosed shopping malls, it would appear landlords are willing to take a gamble on this plucky independent brand. That’s partly because the trending departure of retailers from traditional malls has forced them to make riskier choices.

Despite streaming services taking out a large chunk of the consumer base for music, there does appear to be a movement back to physically owning music.

Records in particular are making a serious comeback. Putnam believes there is a desire among younger buyers to own classic or best-selling albums, with the business less slanted to the top-40 hitmakers.

The record store has also evolved. HMV saw this coming and attempted to incorporate other types of merchandise to supplement the music trade, but it might have been too late on the curve.

Having bought my first disc last week at the Midtown location in Saskatoon, I am optimistic they are on the right track.

Friendly staff inquired whether my first visit met my needs. Call me crazy, but their sincerity took me back to a nostalgic time when my life revolved around visits to these stores.

The thrill of peeling the cellophane back and cranking on the fresh hits was still there, even if I still listen to my Apple Music every day.