Toronto-based ReDev Properties Ltd. may be close to selling four of its Edmonton-area retail properties. 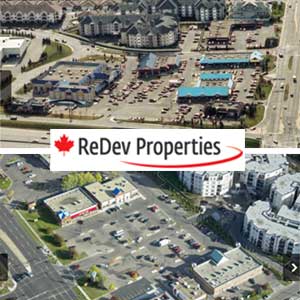 “It is our mandate to look for an exit strategy after five to 10 years, so the timing is in our target,” said ReDev founder and president Richard Crenian.

Trail South Corners is located at 10417 51st Ave. in Edmonton and includes 29,024 square feet of rentable area and about 200 parking stalls. Its major tenants include a Medicentres family health care clinic, Guardian Pharmacy and Dairy Queen (bottom of image).

Parkdale Shopping Plaza is at 10845 81st St. in Edmonton. It has 23,490 square feet of rentable area. The major tenants are Canadian Imperial Bank of Commerce, KFC/Taco Bell, Parkdale Liquor Store and Subway. The plaza is shadow-anchored by a Safeway grocery store.

Whitemud Crossing is at 4211 106th St. in Edmonton and features 93,353 square feet of rentable area. It has 34 local and national tenants and excellent exposure to Whitemud Drive, a major arterial road in the city (top of image).

The fourth property is Inglewood Towne Centre at 11 Bellerose Dr. in St. Albert, northwest of Edmonton. It includes 60,052 square feet of rentable area, including a new pad site developed and leased in 2009. The centre is shadow-anchored by a Safeway and includes Dollarama, RBC Royal Bank, Starbucks, Reitmans, Mr. Sub and Famoso Neapolitan Pizzeria.

Inglewood Towne Centre was purchased in 2003 and is 96 per cent leased. The other three properties were acquired in 2005 and are fully leased. ReDev manages all four.

Sales going through CBRE and Colliers

“Two different companies give you better exposure,” said Crenian. “CBRE and Colliers are both excellent choices and we have a terrific relationship with both.”

None of the properties have bid prices attached, though ReDev would like to see a capitalization rate sale of approximately six per cent for each of them.

“We currently have two of the four tied up with a potential buyer,” said Crenian. “The other two will have offers generated by (today).”

Crenian, who has lived through previous downturns, believes the Alberta market still has growth potential for stabilized and well-managed assets despite the province’s recent economic woes.

“We are still looking for opportunities and working on some potential value-add on our existing properties, and looking for some other sites to develop. Of course we are focusing on retail and, if we can find a plaza to fall into our bailiwick, we will certainly buy that too.”