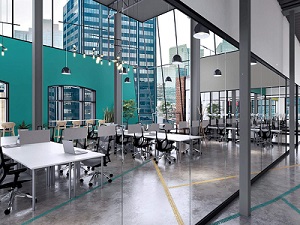 Spaces, a shared office and co-working facility company owned by Regus, is expanding into Canada. Its first office will be located on John St. in Toronto. (Image courtesy Spaces)

“The building is eight floors and five of those floors are dedicated to highly productive workspace,” says Spaces Canada executive vice-president Wayne Berger. “They’re bright, open, full of glass and with lots of great offices that teams and companies can rent for a month or multiple years in order to focus on their level of productivity.”

The former Urbane Cyclist location has been completely renovated as a modern workspace community with collaborative areas, team rooms, co-working space, phone booths, meeting rooms and fully furnished private offices. It has a rooftop patio and two outdoor terraces on the sixth and seventh floors that can be used for collaboration and as event spaces.

Thor Espresso Bar, a Toronto-based and Scandinavian-inspired café, is using the front lobby of Spaces Queen West for its third location. The remainder of the first two floors are “open and full of soft seating, collaborative spaces, team spaces and high-end technology,” according to Berger.

Why Toronto appealed to Spaces

Spaces Queen West members have access to a global network of more than 3,000 flexible workspace locations belonging to sister brand Regus, including 60 Spaces locations in 25 countries. Spaces was formed in Amsterdam.

With a strong presence in Europe, the United States and Australia, the obvious next step for Spaces to expand was in Canada — and particularly Toronto.

“We’re seeing more and more of an influx of international companies that are looking to establish themselves in North America and choosing Toronto as that hub,” said Berger. “We’re getting more and more demand from both our clients as well as the industry.”

Regus has opened 20 new locations in the Greater Toronto Area over the past three years to support demand. Berger believes the growth of the flexible workspace and co-working market is starting to create a new real estate asset class of its own.

Berger said Spaces chose the Queen West location because it’s in a “live, work and play” neighbourhood that’s a good fit for its potential members. He also likes the property itself.

The refurbishment of the building was a “multi-million-dollar investment,” according to Berger.

Next locations in Toronto, Vancouver, Montreal

Spaces is slated to open a second Toronto location, as well as sites in Vancouver and Montreal, in the spring.

The second Toronto site, at 99 Yorkville Ave., will be more of a boutique operation with 17,000 square feet in another Allied-owned building.

“It’s going to be a very high-end location to match the affluent local market in the neighbourhood,” said Berger. “It’s very difficult to get commercial real estate space in Yorkville because of its high degree of high-end retail, restaurants and cafes, as well as strong condo development in the area.”

Spaces’ 42,000-square-foot Vancouver site will be in an independently owned heritage building at 151 W. Hastings St. in the city’s historic Gastown neighbourhood, which has undergone significant gentrification and become a technology hub in recent years.

Spaces’ 35,000-square-foot Montreal site is in the Mile End neighbourhood, a former textiles manufacturing area that’s being transformed into more of a tech centre. Allied is converting former industrial buildings in the area to commercial use, including the one Spaces will be in at 5455 De Gaspe Ave.

“The technology sector is shifting a bit from the downtown core in Montreal up into Mile End,” said Berger. “It offers all of the amenities that we traditionally look for.

“It’s very walkable and has great public transit and lots of energy around the neighbourhood that’s there to support our members at Spaces.”

These first four locations will be the start of an aggressive three-year expansion plan, in which Berger said Spaces is “targeting all major cities in Canada as well as some select tertiary markets where we feel it makes a lot of sense.”

It’s not just solo entrepreneurs and tech-based startup companies gravitating toward making use of Spaces. Berger said there’s been plenty of interest from multiple business sectors, including finance, legal and recruiting.

“What we’re seeing now is more and more companies turning to Spaces to look at incorporating flexible workspace as part of their real estate portfolio to support attracting and retaining top talent and reducing their costs.

“Having more flexibility in their overall lease portfolio is helping companies save significant money.”