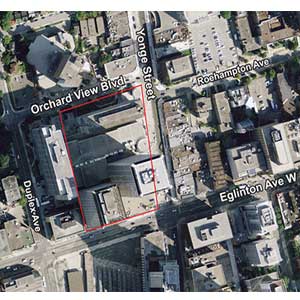 The office component of the mixed-use centre includes 754,068 square feet of space in two towers. An unnamed investment grade tenant has committed to lease an additional 47,295 square feet of space, starting immediately, to occupy a total of 80,600 square feet in four full floors at 20 Eglinton Ave. W. and one floor at 2300 Yonge St.

“With this lease transaction, the office component of this one million-square-foot property is essentially fully occupied, reflecting the high demand for mixed-use space in Toronto’s midtown corridor,” said RioCan president and chief operating officer Rags Davloor.

RioCan’s head office is in Yonge Eglinton Centre, while major tenants include the Ontario Energy Board and Heart and Stroke Foundation of Canada.

The 264,418-square-foot retail component of Yonge Eglinton Centre is 99 per cent occupied by some 70 tenants, and RioCan claims more than 440,000 people pass through the property each day. Major retail tenants include Metro, Indigo, Urban Outfitters, HSBC, Rexall Pharma Plus, Toys “R” Us and the Liquor Control Board of Ontario.

“Yonge Eglinton Centre was one of the most comprehensive renovations RioCan has undertaken,” said Davloor.

“The 45,000-square-foot expansion and renovation features the addition of a rooftop patio, a large centre court, more than 140 interior and exterior synchronized digital screens featuring a panorama video wall, integrated digital signage throughout the centre, a living green wall, an exterior open courtyard, and the addition of key retail brands, including Winners, Cineplex VIP Cinemas, Carter’s, Tim Hortons and the largest Sephora in North America.”

In addition to being used for advertising and promotional purchases, the digital screens can live-stream events and support concerts, food demonstrations, book readings, social gatherings, holiday festivities and fashion shows.

Nearby population and public transit expansion

With Toronto’s ongoing condominium boom, thousands of more people are expected to move into the vicinity of the Yonge Eglinton Centre in the next few years. Davloor said RioCan had that in mind when it revamped the property.

“The updated RioCan Yonge Eglinton Centre is proud to be the premiere shopping and entertainment destination at the centre of one of Canada’s most densely populated communities. This property is a jewel in the middle of one of the most dynamic areas in the city. The area surrounding YEC is experiencing a significant amount of growth, investment and expansion.”

Yonge Eglinton Centre already has a direct connection to the Yonge subway line and will benefit from the completion of the Eglinton Crosstown light rail transit system that’s under construction.

“There will be an obvious positive impact on the volume of people moving through the property,” said Davloor.

“We wanted to make the centre more usable by connecting the retail, office and residential components and, most importantly, making it completely accessible. We also wanted to help this area deliver on its social gathering potential.”

RioCan is Canada’s largest real estate investment trust and had a total enterprise value of approximately $14.6 billion at the end of last year. It has ownership interests in 300 Canadian retail and mixed-use properties, including 15 under development, containing an aggregate net leasable area of 47 million square feet.

“ePlace at the northeast corner of Yonge and Eglinton is well underway,” said Davloor. “Our other retail renovation, redevelopment and expansion plans at Yonge Sheppard Centre are progressing well.

“Lastly, as disclosed previously, Indigo has agreed to take 78,180 square feet at our joint venture project with Allied Properties at King and Portland, bringing the office component of this project to 75 per cent pre-leased.”

RioCan issued its 2016 year-end results in mid-February. Highlights for the year included: the completion of the sale of the REIT’s American operations; repatriating more than $1 billion in capital; significantly reducing its leverage ratio; delivering stronger results from continuing operations; and increasing committed occupancy by 160 basis points to 95.6 per cent.

“We are leveraging this unparalleled scale, our prime urban locations and operational expertise to deliver sustainable value to our unitholders, tenants and the communities we serve,” said Davloor. “We have the entrepreneurial spirit to seize opportunities and the resources to create them.”