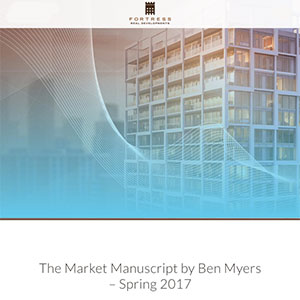 “When you have an inelastic or unresponsive supply in the marketplace, any additional demand — even if it’s only a small amount — is going to increase prices,” said Fortress senior vice-president of market research and analytics Ben Myers, who authored the Canadian housing market report, which includes original research and surveys supplemented by statistics and data from several independent third-party sources.

“A foreign buyers’ tax is like putting a Band-Aid on a stab wound,” added Myers, in reference to a tax instituted in Vancouver and proposed for Toronto to attempt to reduce speculation and dampen spiraling prices.

“Yes, it will help a little bit, but the fundamental issue is that you have too much demand and not enough supply.”

Myers scoffed at the widely held notion that developers are hoarding land and waiting for it to increase further in value before building on it. With development lands selling for $200,000 to $3 million an acre, there are considerable financial outlays upfront and ongoing carrying costs that have to be dealt with.

A January 2017 Fortress survey of developers showed only 1.7 per cent are holding land for future appreciation and 17.2 per cent own approved lands but are being strategic about when they launch a sales program.

The rest would like to develop the lands they own for residential housing as soon as possible, but long and lengthening approval wait times are holding them back.

“When people are lining up days or weeks in advance and you’re getting thousands of registrations, you have to take care of it and strike when the iron’s hot,” Myers said of Toronto’s red-hot condominium market. “You never know when market conditions can change.”

Government policies too concerned with overbuilding

Myers said a bigger issue is the federal government, Canada Mortgage and Housing Corporation and Ontario government’s Greenbelt Plan and Places to Grow Act being seemingly more concerned with overbuilding than trying to come up with policies that might better deal with more pertinent issues affecting the housing market, including the dominance of high-rise over low-rise homes in major cities.

“When you actually look at the square footage of units under construction, we’re probably building 30 per cent less square feet than we were 10 or 15 years ago because of the unit sizes in the marketplace and the difference between low-rise and high-rise,” Myers said.

“Wanting that extra space for dens”

“That’s a significant issue when people are still having kids and still wanting that extra space for dens to work from home and for storage. We’re building a lot less square footage and a lot fewer bedrooms than we did 10 or 15 years ago.

“But 50 per cent of the (condominium) demand in the marketplace is from investors, and investors still prefer smaller suites because they’re easier to lease out whereas end users prefer something that’s readily available right now and that they don’t have to put 15 or 20 per cent down and wait three years for.

“A resale makes a lot more sense for them, and they’re not finding what they want in the resale market.”

People willing to commute to get more

Home sales in communities outside of the Greater Toronto Area are increasing as people realize they can buy a larger and less expensive house, and the report shows they’re willing to endure longer commutes to achieve their goals.

“People typically think that everyone works in Toronto, but there’s plenty of employment in Markham, Richmond Hill and even the northern regions of York Region,” said Myers.

“If you’re in Orillia or Caledon, you can still get to the fringes of the Greater Toronto Area within 30 to 45 minutes. It still makes sense to move to some of these communities.”

Myers believes the increase in purpose-built rental construction that’s taken place over the past couple of years should continue — especially among developers affiliated with pension funds, insurance companies and other investors with long-term strategies — even though many are still reluctant to enter the field.

“Developers still prefer to build condominiums and get in and out. There’s more certainty when you go to construction because you’ve got 60 to 80 per cent of the building already sold whereas, if you go for a rental, when you’re done the thing there may not be the demand,” Myers said.

“There may have been extreme changes in market conditions. You don’t have anything locked in like you do when selling condominiums.

“On top of that, you don’t have deposits to borrow against so you have to put in higher equity to get a construction loan. Those are some of the major issues that prevent some developers from doing a rental. If they’ve been in the condo industry for 10 or 15 years and they know it’s working and selling, why change?”

The report also examines, to a lesser degree, the housing markets in Ottawa, Winnipeg, Calgary and Edmonton.