Réseau Sélection has committed $250 million to five new Quebec retirement residences as part of its five-year, $2-billion expansion plan that will build 30 new communities and 18,000 units by 2020. 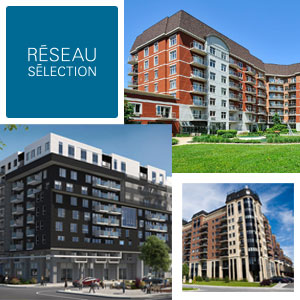 “These projects will generate over 1,000 jobs during the construction phase and 250 more during the operations phase,” vice-president of marketing, sales and public affairs Isabelle Dessureault said of the most recent announcement. “Nearly 1,200 residential units will be developed.”

Réseau Sélection is the largest private sector owner, operator, developer, builder and buyer of retirement residences in Quebec, and claims to have a real estate and operating platform unique to the industry in Canada. The vertically integrated company is in control of its products and services, from development to management, and has its own architectural experts, construction company, electrical and mechanical services supplier, and marketing agency.

The average rate of those aged 75 and over who live in retirement residences in North America varies from five to seven per cent, depending on the region. The Quebec market is much larger, however, as the rate of retirement home living has been 17 to 18 per cent over the past 15 years.

“Throughout the last 15 years, 23 of our 33 communities have been developed through greenfield projects province-wide,” said Dessureault. “As a result, Réseau Sélection has acquired significant expertise and experience in developing, building and operating lifestyle communities that meet the specific needs of our residents in safe, secure and life-stimulating environments.”

Though no specifics have been revealed, Réseau Sélection plans to spend around $1 billion to expand into major urban centres and suburbs in Ontario, Alberta, British Columbia and the northeast United States.

Financing for all of this growth partially comes from major Canadian banks through term debt and construction financing, while the main equity partner is Revera Inc. Through its portfolio of partnerships, the Canadian company owns or operates more than 500 senior living properties across Canada, the U.S. and the United Kingdom.

Claridge Inc. (which represents the interests of the Stephen Bronfman family and is involved in managing a diversified portfolio of private, public and real estate investments) and Centria Real Estate Investment Fund (a corporation affiliated with Fiera Capital) have also partnered with Réseau Sélection on some development projects.

Construction on Le Sélection Granby and Deux-Montagnes is expected to start on April 1 and they’ll greet their first residents in the summer of 2017. Work in Sainte Dorothée and Vaudreuil-Dorion will begin by late summer, with a fall 2017 opening anticipated. Work began in November on Le Sélection Rock Forest and the first residents will move in during the winter of 2017.

“Deux-Montagnes and Sainte-Dorothée will boast a waterside location, while the one in Vaudreuil-Dorion will be at the heart of a shopping area,” said Dessureault. “The Granby complex, by virtue of its location, will form part of the municipality’s downtown revitalization plan.”

There are three other properties that should be completed over the next three months.

Rosemont les Quartiers is a $250-million project in Montreal that will feature 1,400 residential units, a retirement home, 55-plus condominiums and apartments, family condos, social housing, a walk-in clinic and specialized residential units. The first phase consists of a 477-unit independent living community that will open on May 1.

Le Vice Versa Vanier consists of new construction to complement the existing Le Boisé Vanier and La Clairière du Boisé communities in Quebec City. The three properties and their 700 units will form the largest retirement residence in the provincial capital. It will be ready to welcome 350 seniors by July 1.

Le Vice Versa Châteauguay has been developed in partnership with the municipality as part of Châteauguay’s five-year revitalization plan. The project involves nearly $50 million in private investment and will accommodate more than 400 seniors.

It will open in June and offer a home for those who wish to spend their retirement in peaceful and secure surroundings and more than 55 apartments for those seeking complete independence.

Réseau Sélection was founded by Réal Bouclin and has operated for more than 25 years. It has 33 residences in operation or under construction, with close to 3,000 employees serving some 7,500 residents who have given their homes a satisfaction rate in excess of 95 per cent.

Retired Canadians will represent 20 per cent of the population within the next decade, so residences for seniors are increasingly seen by the real estate industry as a prime growth area and competition is increasing among existing and new players.

“Owners and operators must endeavour to provide satisfactory service to customers, otherwise they’ll go elsewhere,” said Dessureault. “That’s why we see private residences offering an increasingly broad range of services and care that are highly valued by customers.

“We provide independent and assisted living options. By making some of our residences adaptable and offering a range of services that can support residents throughout their lives, everyone is able to find a type of service and accommodation to suit their needs all in one location.”