Construction is underway on ArtHaus, an 89-suite condominium and boutique hotel property that will be part of the innovative Arts Court complex in Ottawa’s ByWard Market. 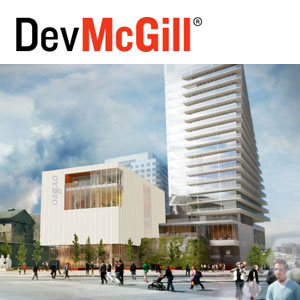 “DevMcGill was delighted to be part of this innovative project involving an art gallery, boutique hotel, university and residential luxury condos,” DevMcGill president Stéphane Côté said of the Montreal developer’s first venture outside the city.

“DevMcGill always had a sensibility to revitalize the neighbourhoods where its projects are integrated and to contribute to the architectural heritage of the city. And this project was upstream with that philosophy.”

Arts Court is a joint venture involving the City of Ottawa, the Ottawa Art Gallery (OAG), the University of Ottawa, DevMcGill and Groupe Germain, which is launching its first hotel in the nation’s capital.

Arts Court is a multi-disciplinary facility located in a former courthouse that’s home to 25 arts organizations, including the OAG. It has been owned and operated by the City of Ottawa since 1988 and is now too small and lacks visitor amenities, adequate programming and revenue-generating space, and doesn’t meet current accessibility standards.

The city-owned Firestone Collection of Canadian Art includes an exclusive variety of Canadian works and is managed by the OAG. It requires new environmentally controlled storage, curatorial and exhibition spaces as it’s currently stored in the basement of the Arts Court in a converted jail cell. Only two per cent of the collection can currently be displayed at any given time.

The $38.86-million Arts Court redevelopment project will include:

* a new 63.000-square-foot OAG with double the amount of its current exhibition space;
* a new 250-seat multi-purpose and film screening room within the new OAG space;
* a new 120-seat black box theatre and four classrooms for the University of Ottawa;
* repurposing approximately 21,670 square feet of space that will be vacated by the OAG and reallocated to media arts partners to meet programming requirements;
* a connection between new construction and existing buildings on four floors to establish an integrated and functional arts facility;
* and a retail element.

Construction started in July on the OAG expansion and Arts Court redevelopment. The OAG expansion is scheduled for completion in late summer of 2017 while the repurposing of Arts Court’s interior spaces will be finished in 2018.

The air rights above the gallery expansion were available and allowed for more than 200 residential units. Construction had to begin within a year of a bid, a window which DevMcGill didn’t believe was sufficient to design a condo and sell more than half of its units. DevMcGill invited Groupe Germain to join what was ultimately the winning bid for the space.

The 23-storey ArtHaus tower at 60 to 70 Waller St. won’t be connected but will be a few steps away from the OAG. It was designed by architectural firms Régis Côté and LeMayMichaud Architecture and Design as well as interior designer U31 Inc.

ArtHaus will feature 89 residential condo suites, a fitness centre and a lounge on the nine floors above the Le Germain Hotel. It will also include a private lobby with a state-of-the-art virtual concierge and intercom system as well as a rooftop terrace with a fireplace when it’s ready for move-in next summer.

Suites range in size from 500 to 1,400 square feet and are on sale now at prices ranging from $246,990 to more than $1 million. Since the building isn’t exactly rectangular, each suite features unique angles, fluid and flexible floor plans with no wasted space, high-end finishes and unobstructed views of the city.

ArtHaus is located close to the CF Rideau Centre, ByWard Market and the University of Ottawa. It has a walk score of 98 and a transit score of 93 that will improve after a new light rail transit station opens nearby in 2018.

Côté founded DevMcGill in 1998 and, now that the developer has expanded its comfort zone to Ottawa, it’s also evaluating projects for Quebec City and Toronto. The main focus remains on Montreal, however, where two major projects are under development.

“The Beaumont project with 140 units is the only high-end project in the Notre-Dame-de-Grâce district offering a 360-degree view pool, a sun-soaked rooftop, a gym, indoor parking, a grocery store and privileged services in a mature area distinguished by its stately centennial houses,” said Côté.

“The Castelnau project with 400 units is an exceptional development that integrates harmoniously within the urban lifestyle of the Jean-Talon, Jarry Parc and Little Italy neighbourhoods, forming one of the most popular residential communities in Montreal. The landmark heritage building has been fully restored and is now home to Phase I of the project.