Do different types of investors have different approaches to the multi-family asset class?

Representatives from private equity funds, a real estate investment trust and a privately owned firm revealed their strategies and talked about their properties at the Sept. 6 Canadian Apartment Investment Conference at the Metro Toronto Convention Centre. 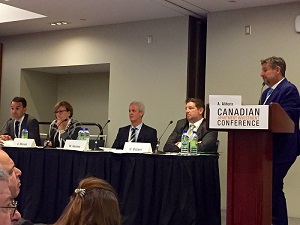 “I think that sector, of all the real estate asset classes, is probably the strongest sector. It’s got demographics and a lot of good things going for it from an immigration point of view and from people wanting to rent more.”

Timbercreek believes in buying older buildings and then creating value in them by providing more professional management and improving customer service. It’s built up a sufficiently large portfolio that it has plenty of potential sites which can be intensified to increase value. Bizzarri said 5,000 to 10,000 units could be developed over the next three years as part of this strategy.

Seventy townhomes were demolished at the 44-acre Heron Gate site near Ottawa’s Macdonald-Cartier International Airport and the tenants were relocated. That allowed Timbercreek to build 400 apartment units in mid-rise buildings that should be completed in the third quarter of next year as the first phase of a multi-part project.

Timbercreek will look through 20 to 30 potential deals before moving on one or two of them, according to Bizzarri.

“It’s a matter of being careful and patient with how you invest in the sector.”

Timbercreek owned approximately 7,000 apartment units in the U.S., which Bizzarri described as a much more cyclical market than Canada, before selling more than half of them.

“There’s always someone building something new in the States and you have to be careful about buying and selling at the right time,” he said. “I think Canada is very much a long-term hold. In Canada, there aren’t as many cities as in the States and it’s not as volatile.”

“All of our clients are hungry for more multi-family,” said Anne Morash, senior vice-president of multi-residential for GWL Realty Advisors Inc., a wholly owned subsidiary of The Great-West Life Assurance Company that manages about 12,000 apartment units in major Canadian cities.

The Livmore is under development in Toronto at the southeast corner of Bay and Gerrard Streets on GWL Realty Advisors-owned land which had been used as a parking lot for several years. The 0.57-acre site will be home to a 43-storey, 595-suite apartment tower with 5,500 square feet of retail at grade, 13,000 square feet of amenity space and six levels of underground parking.

Morash said the building’s “best-in-class” amenities will include: a dog run and dog spa; a fifth-floor amenity deck; a 26th-floor sky lounge; an 1,100-square-foot fitness facility; a large party room with an adjoining “chef quality” kitchen; and a conference centre.

The Livmore will include studios and one-, two- and three-bedroom units that will start to be pre-leased next June. It will have staggered occupancy over four phases, spaced about 60 days apart, starting with the lower floors and moving up.

The site was previously zoned for office, but GWL Realty Advisors did a “highest and best-use analysis” and Morash said all of the metrics pointed at multi-family before construction began in May 2015.

“We have surplus land right across the country and are taking a much harder look at building multi-family assets. We have assets in the west end of Toronto that are zoned for office, but we’re looking at converting them into multi-family.”

GWL Realty Advisors’ top targeted markets are downtown, midtown and neighbourhoods with subway access in Toronto, as well as downtown Oakville and Burlington in Ontario, and Vancouver, Montreal and Halifax.

CAPREIT  (CAR.UN-T) is one of Canada’s largest residential landlords and has about 50,000 units in its property portfolio in Canada, Ireland and The Netherlands.

“If you want to control your destiny as an apartment owner in Canada now, you have to be in the new construction game because there’s not a flow of deals anymore,” said chief operating officer Mark Kenney.

While CAPREIT is involved in a joint venture with First Capital Realty (FCR-T) on a 500-suite apartment in Toronto’s Liberty Village, it’s more focused on intensifying its existing properties, which can potentially accommodate 8,000 to 10,000 more units. Kenney said it has filed applications to develop about 2,500 of them.

CAPREIT is still in the market to purchase assets, however, and acquired a 42-year-old building in Montreal’s Cote-Saint-Luc area for $23.5 million from Chartwell Retirement Residences (csh.un-T ).

It bought the building unoccupied and began renovating its garage and leasing up its 256 suites before the purchase closed in May because it didn’t want to miss the July window when leases historically begin and end in the city.

“We pulled residents from our existing buildings by offering them discounted rent deals, which were still over what I pro formaed for the building,” said Kenney. “It was a good example of the machine working properly.”

Kenney acknowledged Vancouver and Toronto are the two most vibrant Canadian markets. He added he’s seeing multi-family building sales with capitalization rates in the ones and twos in Vancouver which are primarily being sold to developers as opposed to apartment investors.

“They’re not being valued on cash flow. Cap rates are irrelevant in the conversation. It’s all about land and speculation on density.”

Hollyburn has been buying apartment buildings for prices in the $500- to $600-per-square-foot range in Vancouver, which it believes is good value. It’s looking for deals at lower prices than that in Toronto.

“Everything in Vancouver has an intangible land value to it,” said director Dan Sander.

Hollyburn buys from three to 10 apartment buildings a year, depending on available deals, and will continue to look for properties to acquire and reposition.

One such building it acquired this year is Barafield at 1260 Harwood St. in the west end of Vancouver near English Bay. The pet-free building’s one- and two-bedroom suites feature renovated kitchens and bathrooms and dishwashers, while the building has a 24-hour laundry facility and on-site management.

“We’re in a rent-control market and rents are half of what they should be,” said Sander.

Much of Hollyburn’s energy, these days, is being put into new construction. Sander said the company is building about 1,000 new units.