“The future of retail real estate is strong.” 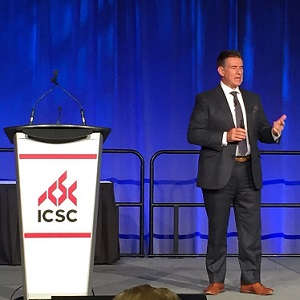 That was a sentiment expressed numerous times in a keynote presentation by retail consultant Michael Brown at the International Council of Shopping Centers’ Canadian convention at the Metro Toronto Convention Centre on Oct. 3.

“Although sales may be captured online, the creation of value is happening in the store,” he said. “Stores have to be less transactional and more experiential and have to be the draw that builds a connection between consumers and brands, as opposed to just a place to buy goods and services.”

The United States leads the world with 23.5 square feet of retail per person, according to Brown, who estimated about half of the stores and retail real estate there should be transformed or closed. Canada ranks second globally with 16.8 square feet of retail per person, and Brown believes some of that space will also have to be transformed in order to thrive under current and future conditions.

Online sales are expected to comprise 10 per cent of Canadian retail sales in 2020. However, Brown said the pace of that growth has slowed and brick-and-mortar stores are still important, acting as billboards and engagement spaces for brands.

“When a retailer opens up a store in a mall in an area where it’s not been, not only do they do sales in the mall but their online sales spike. When a retailer abandons a market completely, and has no more stores in that market, it takes about 18 months for them to no longer do any business in that market.”

“Online retailers have realized that they can incubate a brand online. They can’t be successful only online and can’t build scale online. Amazon is now in omnichannel brick-and-mortar as well as digital retail. It bought Whole Foods and is building stores.

“Physical retail is important for the largest of retailers.”

More creative leasing will likely need to play a role in this changing environment, as retailers which might have required 5,000 square feet in the past now need only 1,200 because their stores are being used more as experiential centres. Fulfillment is often handled by a separate distribution facility.

If space remains available or isn’t optimized, the proliferation of mixed-use projects, which have arisen from retail properties over the past few years, should continue with residential and office units filling the void.

Product value is being surpassed by personal values, and what people believe in and what they want to do, according to Brown. He said studies have shown consumers trust and have more confidence in small businesses than in corporations.

This has led to increased interest in organic and homemade goods, growth in community-based retailing and increased popularity for farmer’s markets, independent bookstores, microbreweries, small distilleries and wineries, and local restaurants and bars that cater to their specific neighbourhood.

Small living spaces and the “gig economy” are creating demand for places where people can get out, mingle with others and share experiences. Brown said mall operators should embrace spas, salons and other similar service providers to create foot traffic and new opportunities.

A cluster of functional and entertainment-based goods and service providers can lead to the creation of destination centres. These large regional or super-regional properties give people a reason to come and spend a day — or even a weekend if they include a hotel.

“Concept malls are really interesting and allow spaces to be more than just places where people shop. They serve a dual purpose. I think there are more and more opportunities to develop those concepts.”

People’s preoccupation with social media, where they want to show the world how cool or adventurous they are through shared photos, has given rise to what Brown termed “selfie factories.”

Former stores are divided into several rooms that provide patrons with fun and unique photo opportunities, and people are willing to pay for the privilege of visiting them. Brown cited the Museum of Ice Cream in New York City as an example, and said similar installations are popping up around North America.