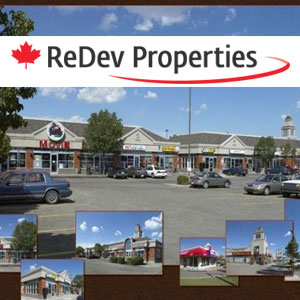 “We were approached by the same purchaser and we made it a bundle for them,” ReDev president Richard Crenian said of the recent sale of Parkdale Square and the September disposition of Trail South Corners.

CBRE Edmonton was the broker for both sales.

Parkdale Square was purchased for $6.4 million by ReDev in September 2005 and sold for just over $10 million. The plaza at 8004 – 8036 118th Ave. is 23,464 square feet and sits on 2.38 acres of land in one of Edmonton’s prime retail districts. It’s fully leased, with ground floor retail tenants including Canadian Imperial Bank of Commerce, KFC/Taco Bell, Parkdale Liquor Store and Subway.

“During our time with Parkdale Square, we’ve maximized and added as much value as we can to the property,” said Crenian. “It was an opportune time to sell.”

Trail South Corners was acquired for $4.6 million by ReDev in December 2004 and sold for similar reasons as Parkdale Square for just under $11 million. The 29,024-square-foot mall is on 3.77 acres of land in another coveted retail area at 10417 51st Avenue NW. It’s also fully leased, with ground floor retail tenants including Medicentres Health Care Clinic, Guardian Pharmacy and Dairy Queen.

Crenian said there was significant interest in both properties.

“Alberta’s economy is slow right now, but the commercial real estate industry isn’t slowing down. When compared with B.C. and Ontario, Alberta’s cap rates are relatively lower, resulting in a better deal for purchasers.

“There’s also a severe shortage of products on the market and, with the number of foreign buyers coming into Western Canada, selling our properties now will result in great returns.”

ReDev sold 105 Street Government Building at 10242-105 St. in March. The 87,451-square-foot office building is in Edmonton’s downtown government district and near the new Rogers Place arena and entertainment district.

ReDev has conditionally closed on the sales of Edmonton’s 93,353-square-foot Whitemud Crossing mall and the 60,052-square foot Inglewood Towne Centre plaza in St. Albert, Alta. Both deals are expected to go through by the end of the first quarter of 2017.

Proceeds from these sales will help fund ReDev’s ambitious acquisition plans over the next two years. The company plans to spend $250 million in 2017 to acquire more commercial real estate assets and another $500 million on similar properties, mainly focused in Western Canada, in 2018.

“We are an asset manager. We need to buy good projects and good assets. Then we work with them,” said Crenian.

“We have been very lucky and we hope to be able to continue to use our infrastructure to continue with our success. The road is long and hard, but the rewards, so long as one does its proper due diligence, are good. We will continue to use all of our available contacts over the past years to continue our acquisition strategy.”

ReDev has purchased and managed more than 30 Canadian commercial real estate properties since 2001.