Retail sales grew by 2.2 per cent in 2015 and are forecasted to increase at a higher rate this year, aided by the performance of the country’s top shopping centres, according to a new Avison Young study and infographic on the Canadian retail real estate landscape. 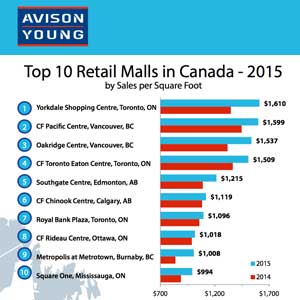 Considering the high-profile departure of all 133 Target department stores in Canada, the closure of smaller chains and a generally lacklustre economy, 2015’s relatively strong retail performance may be surprising to many.

“The demise of Target certainly opened the door for others to take advantage and re-establish their retail presence or strengthen their existing retail presence and distribution centres,” said Argeropoulos.

A weakened dollar kept many shoppers from going south of the border to make purchases and contributed to increased sales in every province but oil and natural gas revenue-dependent Alberta and Saskatchewan in 2015. Retail sales are projected to drop by 2.3 per cent in Calgary and 2.2 per cent in Edmonton this year.

Those gloomy numbers were more than offset by strong showings in British Columbia and Ontario and their respective largest cities. January sales increases of more than nine per cent in those two provinces bode well for further solid growth this year.

Figures for some of Canada’s top malls, on a sales per square foot basis, were even more impressive. With online sales growth expected to outpace the overall retail market in the coming years, traditional stakeholders are embracing e-commerce and fortifying their bricks-and-mortar presence with significant capital investments and innovations to attempt to adapt to an evolving environment.

Toronto’s Yorkdale Shopping Centre led the way nationally with sales of $1,610 per square foot, an increase of about 20 per cent that enabled it to take over the top spot from Vancouver’s CF Pacific Centre, which dropped to second at $1,599 per square foot.

“They’re seeing a return in their investment and will continue to see it as it undergoes further expansion and redevelopment,” Argeropoulos said of Yorkdale.

Two Ivanhoe Cambridge malls, Metropolis at Metrotown in Burnaby, B.C. and Vancouver’s Oakridge Centre, showed respective increases of about 20 and 17 per cent to land them in the list of Canada’s top-performing malls.

“They’ve made significant capital investments to alter the physical scope of the malls,” Argeropoulos said of the country’s most successful shopping centres. “While changing the physical nature of the malls, they’ve tried to change the retail mix in terms of tenants.

“There’s been a significant attempt to draw more foreign retailers into these megastructures, which have a very dominant presence physically and capture a very large trade area. They’re attracting the likes of Apple Store, Lululemon, Nordstrom, Saks Fifth Avenue, Tiffanys, Simons and others.”

Argeropoulos added many of the top malls have some of the above-mentioned retailers in common and big name stores such as Nordstrom, which entered the Canadian market from the United States in 2014, are a big draw that generate larger overall sales volumes.

Most of the biggest and best malls in Canada are owned and managed by pension funds and their real estate arms, in some cases as joint ventures, and provide them with consistent, long-term income streams.

“The top properties are in the hands of pension funds, which are very risk-averse owners that aren’t going to do anything to jeopardize those returns,” said Argeropoulos. “Those that don’t fit real estate strategies going forward will be put up for sale, but it’s very rare when you have a major, major mall come to the market.”

The retail real estate sector had an annualized return of 8.8 per cent last year, compared to the eight per cent REALpac/IPD Canada Property Index overall return. Total retail property investment sales volume was $4.5 billion, 31 per cent lower than in 2014.

“The appetite is certainly there for retail investment, given its relatively sound fundamentals,” said Argeropoulos. “The lack of available product is something that investors are having to deal with even though they have significant war chests to deploy capital.”

CF Promenade in Thornhill, Ont. was put up for sale by Cadillac Fairview in February and presents one of the rare shopping centre investment opportunities Argeropoulos mentioned. Cadillac Fairview spent $25 million redeveloping the 879,000-square-foot mall in 2009.

“I expect that it may be a bit of a flat year in terms of retail sales transactions,” Argeropoulos concluded, “but we’ve always been surprised because all it takes is a handful of large centres to come to the market and trade to boost those figures up.”