A shopping mall in a Quebec City suburb is being redeveloped and will include a new retirement re...

A shopping mall in a Quebec City suburb is being redeveloped and will include a new retirement residence as part of a $100-million, mixed-use project. 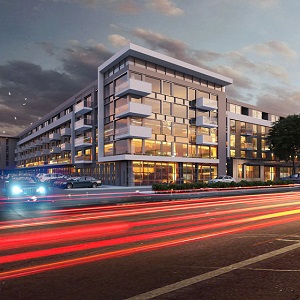 Quebec City and Ottawa are two of the major markets in which Chartwell has been operating for the last 10 to 12 years, notes Maxime Camerlain, vice-president of real estate integration.

“It’s a market we know well. Cap Rouge was a borough that we had our eye on for a long time,” he says. “It was a question of finding the appropriate location to make sure the citizens of Cap Rouge could actually retire in that city, in which they had little options to do before that.”

Camerlain says Chartwell attempts to pick locations people would know as reference points. “We felt that it was a perfect central point for us to establish a retirement home – in an area with a multitude of services.”

Building a retirement home attached to a mall being revitalized gives potential residents the ability to use the mall in the winter without going outdoors, he says.

What used to be a Provigo supermarket is being torn down to make way for the five-storey retirement home. The presentation centre opens Nov. 1 and the building should open to residents in the summer of 2019.

Immostar president André Pelchat noted the mall had been stagnating for several years, with the quality of services deteriorating. The mall had about 20 stores before construction began.

As with other retirement homes in Quebec, the home will follow the popular à la carte model in which seniors can pick and choose the amenities they want. “You have full apartments with the ability to buy in to a multitude of services including meals,” Camerlain says.

Amenities include a gym and yoga studio, indoor pool, library, arts and crafts room, games room and bistro. “We’re very big on doing bistros in our homes, so that people can enjoy a nice happy hour.”

There will also be a family-style kitchen where chefs can give demonstrations or people can cook for others. “It’s something we feel will be appreciated by our foodie clientele.”

The residence is near a golf club, a park, the Cap-Rouge River and walking trails. “We feel it’s a good balance of urban and nature,” Camerlain says.

Among the 360 units, there will be 76 prestige apartments with superior finishings and 36 dedicated care units for seniors who require more care.

Rental for studios will start at $1,995 a month and include one meal a day. “Typically we find that our clientele that comes to studios are not typical people that want to cook three meals a day,” Camerlain says. “It’s something that we’ve been asked by our clients and we’ve been doing in most of our projects and it works out well.”

As is the case with Chartwell’s other seniors’ residences in Quebec, the Cap Rouge retirement home will be built by Bâtimo and EMD Construction.

Chartwell has announced other seniors’ residences in partnership with Bâtimo in Quebec this year in Greenfield Park, St-Hubert, Vaudreuil-Dorion and Candiac. The company now has 45 residences in Quebec and more than 180 locations across Canada.

Aside from constructing office and commercial buildings, Bâtimo and EMD have a portfolio of several residential complexes with a value of more than $1.3 billion.