A downtown Winnipeg development by agricultural giant Richardson International Ltd., will transform two unsightly surface parking lots into what is hoped will serve as a beacon for innovation in the city. 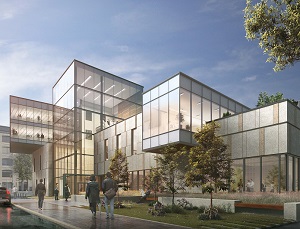 Artist’s conception of the Richardson Innovation Centre which will be built in downtown Winnipeg. (Image courtesy Richardson International Ltd.)

“We absolutely didn’t have to do it downtown,” says Chuck Cohen, senior vice-president of technology for Richardson International.

The centre could have been built more easily at less cost in one of the city’s industrial parks. “But the family that owns this business is committed to Winnipeg’s downtown — it’s as simple as that.”

Certainly the Richardson family has deep roots in the city stretching back to the early 20th century when the Exchange District was an economic powerhouse in Canada’s West.

Now, the hope is the Innovation Centre will launch an economic renaissance based on the new brain economy where technology, research and development (R&D), and innovation are front and centre.

In large part the building’s design will reflect this theme, says Brent Bellamy, a senior architect with Winnipeg-based Number TEN Architectural Group, which designed the building.

“This is not your typical condo-quality construction,” says Bellamy. “It’s a 100-year building that hopefully sets the tone for the development that will follow.”

In many respects, the Richardson Innovation Centre will not just blaze new trails for the Manitoba capital. The project is unique — given its location — for any city.

“Typically buildings like this go into suburbs, but there is a real commitment from the Richardsons that they needed a presence downtown to use the building for a greater good beyond its function.”

For designers, this presented challenges because R&D buildings generally are not aesthetically pleasing structures which foster “dialogue with the sidewalk and the street,” Bellamy says. “One of the challenges is lab buildings are really introverted.”

He points to another research centre constructed downtown, the NRC (National Research Council) Canada buildings constructed in the early 1990s.

Bellamy adds today’s downtown designs promote walkability and community, unlike the sterile monoliths of the past which still dominate many hearts of North American cities.

The Richardson project embodies this new aesthetic with street-level windows which will allow passersby to see R&D in action.

“It isn’t every day that you walk downtown and look through a window and see a pilot plant that makes margarine,” Cohen says.

The building will help consolidate Richardson’s many arms of research at facilities around the world.

Once complete in 2020, the centre will draw more than 100 good-paying, high-tech jobs downtown. The location will be essential to attracting young, highly skilled talent.

“Frankly, if we built this in an industrial park, it would be less well-received by them,” he says. A number of Richardson’s younger workers already live in the Exchange, he said,  with its burgeoning condominium development.

The project is also welcomed by the city’s developer community, Bellamy adds.

“They’re the guys who are trying to rent apartments and sell condos downtown, and they are very excited that (the Richardson Centre of Innovation) will bring good jobs downtown where some of those workers will also want to live,” he says.

“We have the condos, so now we need people to go in them, and this is really a big step toward doing that.”

If its design is any indication — one featuring a glazed atrium from the ground floor to the top floor — the Richardson Innovation Centre will embody the spirit of Winnipeg’s downtown for the 21st century.

“The atrium will be a lantern in downtown that will glow at night,” Bellamy says.