RioCan REIT this month announced the creation of a joint venture with Boardwalk REIT to develop a mixed use tower on part of the retail REIT’s Brentwood Village Shopping Centre in Calgary. 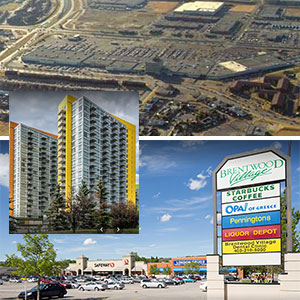 Rather than a one-off, the $70-million project is likely just the first of many such intensification schemes in the works for the country’s largest REIT.

It turns out that RioCan has a slew of potential or planned intensification projects on its books. How many? Nearly 50.

That’s the total revealed in RioCan’s just-released third-quarter report to shareholders. In it, the Toronto-based REIT states it has tagged approximately 50 properties it “considers to be strong possible intensification opportunities, all of which are in the six major markets and are typically located in the vicinity of substantive transit infrastructure.”

Betting heavily on the mixed use, urban intensification trend, the REIT said its objective is to develop approximately 10,000 rental residential units over the next decade.

It is not just pie in the sky either. RioCan has obtained planning approvals for nine mixed use projects. It added that if all planning permission requests are granted as applied for, including those where approvals have been received and those where applications have been filed, a total of 10.6 million sq. ft. of potential development is expected.

The intensification plan will include residential rental units held for long-term rental income, condominiums for sale that will, in most cases, be developed by third party partners through the sale of air rights and commercial gross leasable area. It added that the mix between condominiums and rental residential may change over time depending on market conditions.

Having a geographically well-located portfolio is also helpful for a company looking to pursue such a strategy. RioCan noted that the majority of its expansion projects “are located directly on, or in proximity, to major transit lines such as the existing Toronto Transit Commissions’ subway lines or The Crosstown Eglinton LRT line, which is currently under construction,” adding its intensification of transit-oriented mixed use development “is indicative of both the locational attributes of RioCan’s land holdings and its development capabilities.”

Beyond the GTA, RioCan is working on residential projects in Ottawa (2), Gloucester, Ont., Calgary (3), Edmonton and Victoria.

Based on RioCan’s list of 22 residential redevelopments, the RioCan-Boardwalk JV for the Brentwood Village Shopping Centre is relatively small at a total of 161,000 sq. ft.

The rental residential project, RioCan’s first for Calgary, is “a great example of just one of the many urban intensification projects that RioCan has on hand within its portfolio of high quality urban locations in Canada’s six major markets,” REIT CEO Edward Sonshine said in an announcement of the venture.