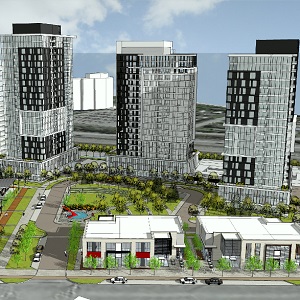 RioCan REIT announced this week it is partnering with Killam Apartment REIT on its development at         Gloucester City Centre in Ottawa.

So after this week’s announcement RioCan has partnered with Halifax-based Killam Apartment Real Estate Investment Trust (KMP.UN-T) to develop the 7.1-acre site in the city’s east end, the two are moving forward at full speed.

“These guys bring a lot of expertise to the table,” Sonshine said of Killam. “They own a lot in Ottawa, they know the market.”

This is the first time RioCan and Killam have joined forces, but it’s unlikely to be the last. Sonshine said the firms are in talks to work together on another project, but that deal is still in its “early days.”

The Gloucester City Centre project has many factors working in its favour. It’s right next to RioCan’s existing Silver City Gloucester shopping and entertainment centre and Ottawa’s Light Rail Transit (LRT) Blair Station on the Confederation Line East, so future residents have easy access to many retail, entertainment and transit options. The LRT is scheduled to open in 2018.

Just as importantly, there is no existing neighbourhood to disrupt. As a result, the project was easily approved by the city.

“If anything, the city was encouraging us,” Sonshine said. He believes part of the reason is the proximity to the new transit line . . . which needs riders. Plenty of riders.

“When you get into the weeds of these transit systems a bit, there is also a big operating loss in these systems if you don’t get passengers.”

So when developers come knocking these days, Ottawa City Council is listening with open ears.

The development will maximize energy-efficiency with the incorporation of a geothermal energy system for the building’s heating and cooling. Sonshine said RioCan and Killam both want the project to minimize its environmental impact.

“The technology works so they tell me, but it does present some engineering difficulties for us,” he said. “But, I am sure we will conquer them.

“It will actually be a bit of an experiment, though that is quite a thing to say about a $150-170-million investment.”

From Killam’s perspective, the partnership fits in with its overall philosophy.

“It aligns with Killam’s growth strategy of developing high-quality properties and diversifying geographically,” Killam’s president and chief executive officer Philip Fraser said in a release, “with an emphasis on next generation operating systems and building features.

“Partnering with RioCan provides Killam the opportunity to participate in a four-phase apartment complex located next to both modern transit and amenities, and to grow our Ontario portfolio.”

“Despite recently announced expanded rent control guidelines in Ontario to include apartments built after 1991, new apartment development continues to be a sound strategy,” Fraser said. “The all-cash yield on this project is expected to be well above the return achievable in today’s acquisition market.

“This is expected to translate into net asset value creation for Killam’s unitholders upon completion of the project.

“In addition, with an expected net operating margin of approximately 70%, compared to 55% to 60% for many older assets, the property’s exposure to increased operating costs is limited, and its long-term net operating income growth potential is enhanced. Finally, with no deferred capital, the net cash flow from the project is expected to be stable and predictable.”

The Gloucester City Centre project is one of a series of such developments RioCan could undertake across Canada over the coming years. The company is looking to modernize many of its retail sites, which are decades old and, in some cases, underperforming.

In Ottawa alone, RioCan has also received city council approval for a redevelopment of the Westgate Shopping Centre, and is considering options for the Lincoln Fields and Elmvale Acres shopping centres.

Sonshine said the company originally identified up to 50 possible redevelopment sites, but has trimmed that to about 30 viable options. In Ottawa, however, the company is going to move slowly. At least for now.

“It’s going to be very exciting. Ottawa is a tough market for new stuff. We are pioneering a little bit, certainly in this area of Ottawa,” he said. “If it does work, we will get very active.”

It owns and manages Canada’s largest portfolio of shopping centres with ownership interests in a portfolio of 300 Canadian retail and mixed-use properties, including 15 properties under development, containing an aggregate net leasable area of 47 million square feet.