RioCan REIT (REI.UN-T) has taken the next step in its program to redevelop dozens of its retail properties across Canada,  announcing Monday its new residential brand, RioCan Living. 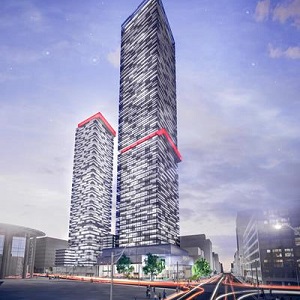 RioCan Living will drive the trust’s efforts to turn selected existing retail shopping centres into mixed-use communities. In a release announcing the move, RioCan says this marks its “official, and permanent, entry into the residential market”.

“Over the last 25 years, we have accumulated a unique portfolio of income-producing properties with significant redevelopment potential, strategically situated on or near existing or approved transit lines,” says Ed Sonshine, CEO of RioCan, in the release. “During that same time, a large shortage of new purpose-built rental buildings has emerged in Canada’s urban centres.”

* See also RioCan Living: REIT’s plan to stay “ahead of the curve”

RioCan has identified 43 properties within its portfolio as mixed-use residential opportunities, with the potential to translate to more than 20,000 residences in Canada’s six major markets. All but a few of the projects are slated to house rental apartments, with proposed developments ranging from affordable to ultra-luxury.

There are currently approximately 2,800 units (about 2,100 residential rental, plus more than 700 condos) spread between eight RioCan Living projects that are, or will soon be, under construction. The first rental completions are scheduled for as early as the first quarter of 2019.

Of the projects actively under development, six are in Toronto, one is in Calgary and one is in Ottawa.

Each of the eight properties is located along a major public transit corridor, with locations ranging from prominent intersections such as Yonge and Eglinton, and Front and Spadina in Toronto to populous, urban avenues such as College Street, Toronto and existing shopping centres including Gloucester Silver City Shopping Centre, Ottawa and Brentwood Village, Calgary.

“It’s incumbent upon RioCan to figure out ways to make our properties better, more effective, and more valuable” Jonathan Gitlin, senior vice president, investments & residential, says in the release. “At the same time, we are delivering best-in-class, professionally managed residential units at a significant scale to the cities and communities that need it most.”

This includes the eight active projects, plus 13 additional mixed use residential development projects in the Greater Toronto Area alone. Eight of the additional GTA projects are in the early stages of development and five under consideration for zoning approval submission.

Each of the additional 13 projects is located on either planned or existing transit lines and represents approximately 12.5 million square feet of potential spread across 13 RioCan properties.

“Building on or close to transit will allow us to deliver sustainable, livable communities that minimize the impact on the environment while offering future residents the opportunity to live, work and play within a reasonable distance,” says Sonshine in the release. “We intend to become one of the leading residential landlords in the country.”

“There’s a huge opportunity to take what exists within RioCan, namely numerous strong connections with very strong retailers, and merge that with our residential developments to deliver a true diversity of uses and tenant mix,” says Gitlin.

The portfolio is comprised of 289 properties, including 17 development properties, with an aggregate net leasable area of approximately 44 million square feet.