RioCan Real Estate Investment Trust’s (REI.UN-T) December sale of 49 properties in Texas and the northeastern United States to The Blackstone Group for $2.7 billion ended last year with a bang, and it’s led to a very active 2016. 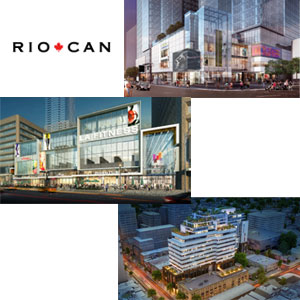 “We thought it was a great time to sell for financial reasons because of where the U.S. market was and where the Canadian dollar was,” said chief executive officer Ed Sonshine, who noted that the divestiture of the 13-million-square-foot portfolio repatriated about $1.2 billion in capital since the U.S. investment increased in value by approximately $930 million over its purchase price.

“We were unable to expand further down there because pricing had gotten so high. But what we wanted to do with the ambitious development program we have was to put our balance sheet in the best position it’s ever been in, which it is. In our entire history, we’ve never been as financially strong as we are.

“It didn’t hurt that $1.2 billion came up north. When you put that infusion of capital together with our recently announced $1-billion credit facility with all six banks, we’ve got all that we need.”

RioCan was Target’s largest Canadian landlord when the American department store chain withdrew from the market, leaving the trust to deal with 18 stores that weren’t picked up by other big box chains including Lowe’s and Canadian Tire.

“Some of them have gone to single tenants but most of them we’ve had to redo and turn into premises that four or five tenants will occupy,” said Sonshine. “From a development, planning approval and construction point of view, it’s a huge effort.

“We’ve essentially got it all done from the leasing side and now the major work is to get all of the new tenants in. We’re going to come out pretty good winners on this. The total income we’re going to be generating from the Target stores is going to significantly exceed what we were getting before, and most of the capital money came by way of a settlement from Target. We got $135 million from them that pays for the redoing and I think they’ll be better shopping centres.

“No disrespect to Target, but one of the reasons they closed is that they weren’t attracting people. Now we’re going to have a better mix of people with what we believe will be very successful smaller retailers. At the end of the day, it will be a winner. We’ve just gone through three years of pain to get there.”

Some of the new tenants in the former Target locations include Winners, HomeSense, Marshalls, PetSmart, Sport Chek, Indigo and Denninger’s Foods Of The World.

RioCan has turned its sights to redeveloping urban, transit-oriented shopping centres in Toronto and, to a lesser degree, cities including Ottawa and Calgary.

“This is where we’re ripping down things and looking to build apartment buildings and so on,” said Sonshine, who agreed earlier this year to remain in his role until at least December 2018. “Every single one of them is a major undertaking.”

These undertakings include dealing with municipal governments and local residents while negotiating with each existing tenant.

“People who live in these areas, where there used to be a one-storey plaza or a little mall, don’t like change when suddenly there’s going to be a 20-storey building sitting there,” said Sonshine. “You get a lot of pushback.”

A joint venture between RioCan and U.S.-based Kimco Realty Corp. is winding down after the trust agreed to pick up 22 properties for $715 million from the largest publicly traded owner and operator of open air shopping centres in North America last September. Other joint venture properties have been sold to third parties as Kimco prepares to exit the Canadian market.

“The last three have been held up a little bit because they were Target stores,” said Sonshine. “Until it became clear what was happening with them, you couldn’t sell them to a third party and you couldn’t agree on a fair price between the two partners.

“Kimco remain our good friends and we’re working with them to help reach their goal, but it also gives us some pretty good real estate that we know all about since we already own half of it and manage the properties. That joint venture should, if all goes well, be finished by the end of this year.”

(Images from the RioCan website illustrate the REIT’s Toronto Yonge and Eglinton property at the top right, the Yonge and Sheppard shopping centre in the middle and the Portland and King development at the bottom.)

Part two of this article and interview with RioCan CEO Ed Sonshine will be published on June 29.