Edward Sonshine still remembers the moment that changed the fate of Canada’s largest REIT. It was more than a decade ago that the RioCan chief executive was reading a Statistics Canada report. 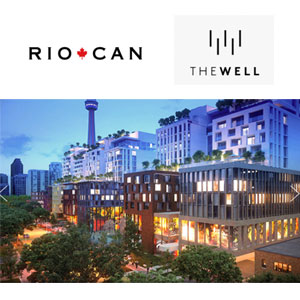 “Everything I found out and everything I knew myself, I said `well that is just going to continue.’” The major driver of Canada’s population growth is immigration and most of those new Canadians settle in the big cities where job opportunities are best and there is already a familiar and supporting ethnic population.

“We really started back in 2005 when we really figured out something was going on here in Canada and we sold off a big chunk of our tertiary market properties like Midland and St. Thomas (in Ontario),” said the REIT chief.

He points to nearby Kingston, Ont., with a steady state population of about 75,000 where the company owns a major shopping center.

“We were talking about Winners and I said (to a RioCan leasing agent) `can’t you get Winners to go out and look at the space? He said, `They already have two stores in Kingston, they are not going to have another one.’ But when you have an area like Toronto, there are always new places to launch stores, because the population keeps growing.”

Today, more than 77% of the REIT’s revenues come from the country’s six major markets, within spitting distance of RioCan’s long term goal of 80% of revenues.

With a busy slate of development, RioCan’s largest and most ambitious project is the mixed use project dubbed The Well on the lands currently occupied by the Globe and Mail newspaper. “It’s the most exciting and certainly as a single project by far the biggest.”

The 7.7-acre parcel will be the site of a 3 million square foot mixed use development that features joint venture partners Allied Properties REIT and Diamond Corp. RioCan recently announced a deal to sell their interest in five of the six residential towers to Tridel and Woodbourne Canada Partners for $180 million.

On a recent conference call with analysts regarding the REIT’s second quarter results, Sonshine described the as-yet under wraps development as “entertainment oriented experiential.” A place to explore, to sit, to be entertained, to enjoy. A new destination in the heart of the city, in other words.

“The retail is what we are focused on, Allied REIT is working on the office. We pretty well know what it is going to look like,” Sonshine said. Construction is expected to start early in 2017 for The Well.

Sonshine sought out partners for The Well because “it was so big” and spreading risk on a $1-billion-plus project is a good idea. However, given RioCan’s urbanization focus, expect plenty of joint venture partners in the REIT’s future.

“I think the future will be large mixed use projects like this. They are the hardest sites to find, we just got lucky, we put together 8 acres downtown, we are not going to get that often.

“But where you have got mixed use sites, it makes sense to me to bring in partners both for risk mitigation but also for expertise. Allied REIT knows how to do office, Diamond Corp. understands the whole zoning side of residential. And hopefully we understand the retail component.

“And I tell you we are going to build a retail facility, it’s going to knock the whole city off. It is going to blow people away what it is going to look like.”