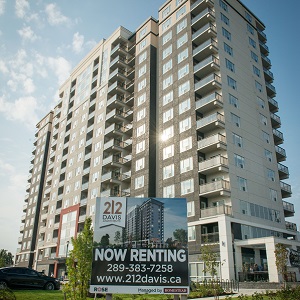 “A lot of the companies that became well-known like Timbercreek and CAPREIT (CAR.UN-T) were basically buying up old product at significantly below-replacement cost, spending money and getting dramatic rent pick-ups.

“That really became the next phase between then and now. What we and the industry have begun to see is that the cost of these older buildings is now approaching replacement cost. So a lot of people are starting to have a keen interest in rentals.”

While the pause button was hit on that interest with the April 20 announcement of rent controls in the provincial Liberal government’s Ontario’s Fair Housing Plan, developers are working with multiple levels of government to try to find ways to kick-start a purpose-built apartment market that had been largely dormant since an initial round of rent controls were introduced in 1975.

That was the case with 212 Davis Apartments, where Reisman said York Region and the Town of Newmarket came up with a program that would defer development charges amounting to approximately 10 to 15 per cent of the overall development costs.

They also permitted covered surface parking, which cut down on costs and allowed for a shorter construction cycle than would have been possible had underground parking been mandated.

“Strategic relationships are very common to most successful Greater Toronto Area (GTA) developers,” said Reisman, noting the importance of working with partners from the public and private sectors to get things accomplished in an environment where development cycles are longer than they used to be and projects involve more intricate planning and more detailed requirements regarding such things as building codes, energy use and accessibility.

“In order to build more purpose-built rentals, we’ll be looking to various levels of government for financial or other support.”

Green & Rose Developments Inc. is a partnership formed between Toronto-based The Rose Corporation and Greenwin/Verdiroc Developments to develop 212 Davis Apartments. The principals of Verdiroc are also the owners of Greenwin Inc., one of Canada’s largest privately owned residential property management companies.

Greenwin owns and/or manages more than one million square feet of commercial space and 20,000 residential units in townhomes and apartment buildings of all sizes throughout the GTA, as well as Cambridge, Guelph, Hamilton, Dundas, Kitchener, Niagara Falls, Ottawa, Oshawa, St. Catharines, Waterloo, Montreal and Saint John.

Reisman has been friends with the Greenwin owners and leadership group from the Green family for years and saw them as a natural partner for 212 Davis Apartments.

“They brought a lot of design expertise and property management, and they also shared the financial burden, particularly helping us with the construction financing that they’re familiar with,” he said.

The building started accepting tenants in early September and is now close to two-thirds leased.

“We’re probably ahead of target and slightly better on rents,” said Reisman. “So, between the two of them, we’re ahead on the plan.”

The building is the first phase of the aforementioned public/private pilot project for land acquired by The Rose Corporation from Etobicoke, Ont.-based Bridon Baker Developments Inc. about five years ago.

Current plans for other parts of the site call for two more 15-storey buildings and one of nine storeys that would house about 460 units in approximately 500,000 square feet. They’ll be built in phases and could be purpose-built rentals, condominiums or a combination of both.

“It’s still in the early design phase and could evolve over time,” said The Rose Corporation president Daniel Berholz.

The Rose Corporation’s other activities

The Rose Corporation is a boutique real estate development and asset management firm with “a very wide appetite” and an “entrepreneurial and opportunistic” approach to business, according to Reisman, who formed the company in 1982.

Last year, The Rose Corporation acquired a 60-unit apartment building at 270 Spadina Rd. E. in Kitchener, Ont. that it’s making substantial renovations to in order to create an apartment project with higher density.

King George School, built in 1912 just off Main Street in Newmarket’s historic downtown, is being transformed by The Rose Corporation into King George School Lofts & Town Homes. It will include 11 condo lofts within the old school building surrounded by 14 two-storey freehold townhomes. It’s being marketed now.

The Rose Corporation also has land holdings in York Region and Western Canada and expects to partner with developers to start building on them next year.