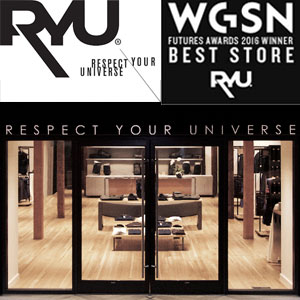 “We wanted to create a very authentic looking store that fits very well in the neighbourhood that it’s in, which is a very fitness-focused part of Vancouver,” said RYU vice-president of retail and operations Brett Pawson of the Kitsilano location that features beaches, bike lanes, running paths and Canada’s longest swimming pool.

WGSN describes itself as “the world’s leading trend authority” for the fashion and creative industries.

RYU’s flagship store was chosen for its award based on “product offer, in-store experience, customer service, retail innovation and ability to inspire those who pass through its doors.”

The store was designed by AA ROBINS architect’s Tony Robins, who accepted the award on the behalf of RYU, which stands for Respect Your Universe. The location features 3,100 square feet of space on the main floor, 1,900 square feet on the second floor and a large outdoor courtyard.

The store had a number of previous tenants and RYU reused its original hardwood floors and wooden pillars. The objective was to keep things simple and minimize the amount of outside materials used.

“We’re not marketing that we’re a sustainable company,” said RYU vice-president of product and brand Treya Klassen. “We just are because we have to be.”

In addition to retail space, the main floor features a nutrition bar where customers can avail themselves of complimentary fruit and bottled water and charge their electronic devices.

“We designed the space so people can linger and we can show demos of our products,” said Pawson. “There’s no real urgency because we don’t want people to feel like we’re rushing them in and out.”

There’s a fully equipped gym on the second floor and all three components of the store are used to host community and fundraising events. The site is used most evenings and weekend mornings for free by personal trainers and fitness instructors who conduct classes.

RYU will open its second store at the corner of Robson and Thurlow streets in Vancouver’s main downtown shopping district this summer.

“It’s a smaller footprint location with 1,100 square feet and more of a boutique concept,” said Pawson, who expects a more international customer base due to a location that attracts a lot of tourists.

A third Vancouver RYU location will be announced soon and a fourth may follow that. A search for an appropriate site in Toronto has just begun in advance of a new opening next year.

“Our hope is to create a great community concept store in Toronto like we have in Vancouver,” said Pawson.

The Toronto site will mark RYU’s brick-and-mortar expansion outside of its hometown. The company is also targeting California for a new store in 2017.