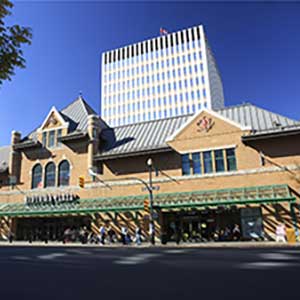 The report notes retail landlords are experiencing low vacancies while vacancy rates have increased in the industrial and office leasing markets.

In the third quarter of 2017, the retail vacancy rate in Saskatoon was 3.21 per cent. That vacancy is primarily in large footprint buildings while small commercial retail unit space remains difficult to find.

A year ago, the overall retail vacancy rate was 4.3 per cent.

“The main contributing factor for the sharp decline in vacancy was the leasing of large footprint vacancies throughout the city, mainly two Target stores that closed in 2015.

“They have since been fully or partially leased in 2017 by Sobeys Extra in Lawson Heights mall and a national fashion retailer in The Centre Mall,” says the report.

“Asking rental rates in Saskatoon remain unchanged since the beginning of 2017. New retail development in the city commands net rental rates starting at $32 per square foot and the city average is still $25 per square foot for retail space of all ages and qualities,” adds the Colliers report.

“The low vacancy rate as well as the cost of construction for new development are the reasons why rents have not shifted in the market for several years.”

Keith Webb, vice-president of the Saskatoon office for Colliers International, says there’s been very little new retail space started in the city in the last couple of years that was done on spec.

“Is there room for more retail? I think so,” says Webb. “I think we’ve got a good picture. I believe we’re in good shape.”

This year saw the first of three Save-On-Foods grocery stores open in The Shops of South Kensington. The development in the West End of Saskatoon is also home to the city’s first Popeye’s Louisiana Chicken franchise.

Over the past nine months, several retail developments have completed construction and secured tenants – Preston West, Cory Common, The Shops of South Kensington and a neighbourhood development along Rosewood Boulevard.

“Despite slowing residential development, the next two to three years will see significant retail development in all corners of the city,” says Colliers.

Saskatoon shoppers have benefited with the opening of several new stores throughout 2017.

Winnipeg-based Dufresne Furniture and Appliances has also set up shop, occupying a portion of the former Sears Home Store on Circle Drive.

The retail market is buoyed by some strong economic factors. The Conference Board of Canada says better times lie ahead for Saskatoon, where real GDP contracted for two straight years, including a 0.8 per cent decline last year.

“Despite only modest firming of the prices of commodities on which Saskatchewan and thus its cities depend, better prospects for both the goods and services sides of Saskatoon’s economy will fuel an increase to 3.6 per cent GDP growth this year, although gains will throttle back to 2.0 per cent in 2018,” says the conference board in its recent Metropolitan Outlook report.

“Healthier GDP growth should prove a tonic for the job market. Saskatoon’s employment fell 0.6 per cent in 2016, the first dip in five years, but a 0.8 per cent increase is our call for this year, to be followed by a stronger 1.2 per cent advance in 2018.”

Terry Napper, general manager of Midtown Plaza in Saskatoon, says the city’s trade area totals about 500,000 with many surrounding communities.

“It’s been a tough year this year. I think Midtown is running down on average seven or eight per cent a month. Still, it’s a good centre. It does $670 a square foot. But this year’s been a little tougher. The last two years before 2015 and 2016, the centre was on a roll. We went over $700 a foot,” says Napper.

Webb says it will be interesting to see what happens to the space that will come open in Midtown Plaza when Sears Canada closes.

“I think that’s a good thing,” says Webb. “We’ll probably get some fashion tenants. We’re missing some of those fashion tenants that people like to see here which would be Forever 21, H&M, Zara, Simons. We don’t have those here and we are a big enough market to have those.

“If we can get some of those tenancies to come to Saskatchewan for Midtown, I would think that will be a good lift for the number one retail enclosed mall market.”