“I think we’re eating in linens right now,” I said casually to my mom recently. We were taking in... 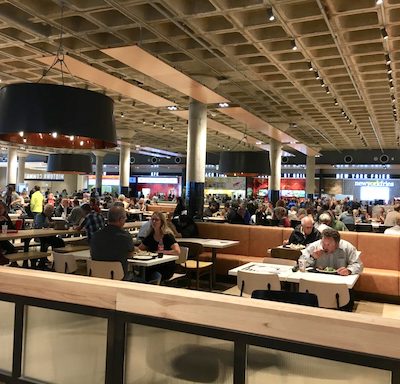 “I think we’re eating in linens right now,” I said casually to my mom recently.

We were taking in the tastes offered by Saskatoon’s Midtown Common, the new Midtown Plaza food court located in the Sears vacancy.

Any semblance of the historic retailer, however, has all but disappeared. The shopping space has been replaced with exposed concrete and a modern look.

Basically, it is everything Sears wasn’t.

Sears closed the doors for good in January 2018 at the Midtown Plaza, Saskatoon’s downtown enclosed mall. The vacancy as a whole was blocked off from the rest of the mall and I’d assume the demolition has been ongoing ever since.

Rumours swirled around who would be filling the estimated 160,000-square-foot tenancy. I predicted that they’d chop the space up and indeed, that’s what has happened.

Midtown Common has chewed up approximately 42,000 square feet of what used to be the second storey of Sears. The remainder of the second floor is currently blocked off, but I would expect it will be developed in the future.

The main floor of the vacancy has been transformed just as dramatically.

The natural existing corridor from the mall now extends into the Sears space (right through perfumes and makeup!) and offers multiple tenant retail units.

Signage indicates the Shoppers will soon relocate to a newly demised unit that will face 20th St., basically in the old sleepwear and lingerie section.

I don’t have any confirmation if this is to allow for direct outdoor access, but that would align with the format of other Shoppers locations. 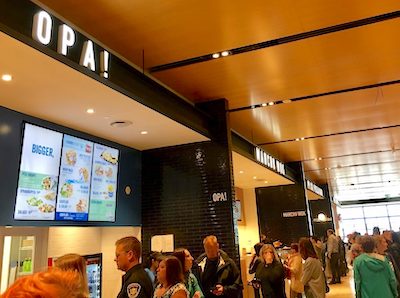 A view of the food service area at Midtown Common in the Midtown Plaza in Saskatoon. (Courtesy Kelly Macsymic)

Most of the existing tenants have moved up from the previous food court, which was located on the main floor of the Midtown facing toward Idylwyld Drive.

There are five new vendors to the food hall, with room for 16 tenants in total. Having visited a few times now, I’ve tried newbies Mia Pasta (meh) and Pi Co (yum!).

I’ll pretend my decision to have KFC, which is new to Midtown, was because my seven-year-old niece wanted it. But that’s a lie. We both did. I can confirm it was delicious as always.

The old food court is already cordoned off for MEC’s renovation, which will see 16,000 square feet of retail with 4,000 square feet for service shops and community rental space.

MEC (Mountain Equipment Co-op) is expected to open in the spring of 2020.

The entire facelift to the mall and new food hall is estimated to be costing the Midtown owners $80 million. This will be softened slightly by a tax abatement, which applies only to the Sears portion of mall, from the City of Saskatoon.

Though the city has no policy in place, council endorsed what will effectively be a five-year tax abatement worth approximately $565,000 per year.

Kelly Macsymic Business Manager, Stuart Commercial Inc., Sales Associate, ICR Commercial Real Estate
I am a gal of all trades and wear a few hats at my current job though nothing quite as esteemed as my 1996 Unity Western Days Rodeo Queen crowned cowboy hat. I spend my time as a sales and leasing agent at ICR Commercial Real Estate (ICR), in addition to my other gig as general sidekick and business manager for Barry Stuart at Stuart Commercial. Inc. I started my journey in the small town of Unity, SK. My grandmother encouraged me to create mock newspapers which I, like any good keener, produced in abundance. My early publication days came to a quick end when I broke the news in one of these homemade papers with word of a surprise birthday party for my grandfather, and proudly presented it to him. Undaunted, I pursued the news bug all the way to Lethbridge College and was gainfully employed for several years in weekly papers in rural Saskatchewan. After a few adventures at the University of Regina and abroad in England, opportunity knocked and I accepted the chance to move to Saskatoon. I landed at Barry’s doorstep and have since been taken under his wing. He’s shown me the ropes at ICR through his most capable hands as one of ICR’s top producers. We are a dynamic team. I relish the challenges (most of the time) he throws at me daily. My other commitments include BPW (Business and Professional Women) Saskatoon in addition to volunteering as president of the Holliston Community Association.