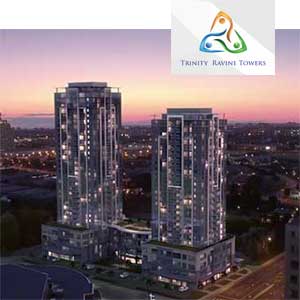 Trinity Ravine Towers is located on the same 11-acre property as a church built by Global Kingdom Ministries at 1250 Markham Rd. in Scarborough in 2008.

The development is aimed at those aged 55 and up and will feature two towers built on 2.5 acres that were rezoned for residential use in 2013 and until now had been used for a church parking lot that will be relocated to another part of the property.

“It’s not normal and natural for a church to become a developer, but we see the need and have experience and a really good team working with us,” said Kalideen, who noted the lack of quality seniors’ housing in Scarborough.

Construction on the foundations for both buildings will begin in the early spring to save costs even though they’ll be built in two phases separated by a few months. Occupancy is expected to take place in mid-2020.

Trinity Ravine Towers has a projected cost of about $155 million that will be paid for by an investment from Global Kingdom Ministries, a construction loan and proceeds from unit sales.

Global Kingdom Ministries was founded in 1956 and its original Scarborough Gospel Temple was housed in a purpose-built sanctuary at 710 Markham Rd. Its first expansion was completed in 1963. Development began on another church, Malvern Christian Assembly, at 6705 Sheppard Ave. E. in 1978.

Kalideen said Global Kingdom Ministries has strong ties with the local community and has created and kept relationships with the appropriate people — including those at the local, provincial and federal levels of government — through those previous building projects.

“We’re breaking ground on new ways of churches doing charitable work,” said Kalideen. “We’re trying to be really innovative but are still managing the risk at the back end to make sure we’re protected.”

Kalideen said Global Kingdom Ministries is willing to provide advice and guidance to other charitable organizations and churches that might be in a position to undertake similar projects.

“We’re not a deep-pocketed developer. We’re just trying to make a difference with what we’ve got. We know who we are and know where our heart is. We’re not trying to be something that we’re not.”

It will also include: a gymnasium; a fitness centre; a rooftop terrace; a library; lounges; a movie/media room; a workshop; a craft room; meeting/common rooms; a beauty salon; a convenience store; a coffee bar; computer labs; a wellness centre; and a shuttle to Olympic-sized swimming pools.

The site offers easy access to Highway 401, a 24-hour bus route, the upgraded public transit system that’s been promised for the area and the Scarborough Town Centre mall.

Each suite will include 360-degree turnarounds in bathrooms and kitchens, large windows, walk-in bathtubs and a full or Juiliet balcony. Suites will range in size from 527 to 1,189 square feet and in price from $272,900 to $640,000. They’re being sold as part of a “Life Lease” program.

“It allows residents to buy at market prices, and they can sell it, bequeath it or give it away,” said Kalideen.

“The main difference is that, as a developer, we’re allowed to stay with the project because the land is leased to the project and we can offer services. In a regular condo, the developer moves away.”

Three tiers of service will be offered — independent care, multi-leveled dependent care and assisted living — and owners may change them as their needs evolve.

All residents will have access to medical support and 24-hour emergency care as well as sports, recreational, artistic, musical, travel and fitness programming.