Sears is out, but CRE possibilities are endless

Sears Canada has finally pulled the plug, granted permission on Oct. 13 by the courts to start liquidation of the company’s remaining stores. 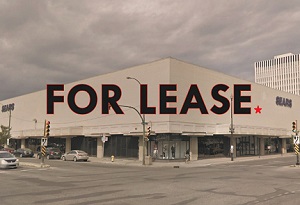 The Sears in Saskatoon’s Midtown Plaza will soon be a memory. But what will replace it? (Image for illustrative purposes only. ICR does not have this property listed.)

This includes job losses for more than 12,000, many of whom have helped served generations of Canadian shoppers.

So, I posed the following question to my friends and social media followers last week: If Sears is out of Saskatoon’s Midtown plaza, what should be in?

After a flurry of brainstorming, I got some pretty good suggestions. Hopefully landlord KingSett Capital is listening!

There is a long list of retailers that still do not call Saskatoon home.

For example, Regina has an H&M and Justice, but we do not. There is a group consensus among shoppers that we deserve them, too.

People would also like to see Simons, Forever 21, Hot Topic and Urban Outfitters, none of which are in Saskatchewan.

The vacancy would lend itself nicely if Old Navy, for example, decided it needed another location.

But is Saskatoon ready for new luxury retailers? Saks Fifth Avenue and Nordstrom are both expanding in Canada.

Finding one tenant to fill the Sears vacancy might not pan out. Therefore, my colleagues agree a reconfiguring of the space for smaller users is a serious option.

If the space changed from a single tenancy to a multiple tenancy mix, there would be opportunities for smaller retailers who have previously been unable to secure a space in the Midtown.

Other options that were offered up, though some are more unlikely than others, have included:

* A core grocery store: Much-needed and much-wanted. Logistically, the site presents some problems, but perhaps they could be worked out;
* A gym: There are more and more opening every day. Perhaps this site presents an opportunity for a Gold’s Gym or something niche;
* Superstore: They certainly exist in malls elsewhere, and it would both fill the grocery component while also being able to showcase retail lines;
* IKEA: Keep dreaming; we don’t have enough people to catch their interest yet. Their small concept pick-up stores don’t even exist here yet, but this is a dream list so we’ll leave it on;
* Rec Room: Cineplex is expanding its Rec Room concept across Canada. It’s typically attached to theatres, but proximity to Cineplex’s existing downtown centre might be close enough. With plenty of room to build the concept, this could include a variety of entertainment draws (games, laser tag, adult ball pit!) while possibly providing child care services;
* Office Conversion: With high vacancy at present in downtown office, it’s unlikely the mall owners would consider a conversion. But it’s not totally outside the realm of reality in a full-site redevelopment plan.

I want to thank everyone who responded to my call for suggestions. I hope I got them all in here.

On a final note, I offer up CBC as the official forerunner for the longest-shot idea I’ve heard so far: a new library location. I can’t think of a worse use for the space myself, but never say never!

I welcome your thoughts, please email me directly or comment below. In the meantime you’ll find me stopping in to Sears periodically to witness the chain’s final days.