Two Winnipeg real estate veterans have been honoured by Chicago-based CCIM Institute for their vision, dedication and efforts to promote the organization and its “Certified Commercial Investment Member” (CCIM) designation globally. 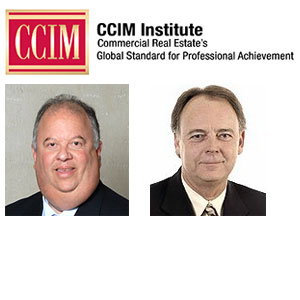 “It was a surprise because it’s not given away every year,” said Shindleman, who added that he was surprised to be called back on stage to receive the award after he’d just finished emceeing the inauguration of Robin Webb as CCIM Foundation president — believing that he had omitted something from his speech.

“I was very humbled to receive the award. It felt very good. The recognition of one’s peers in the industry always makes it more special.”

There are nearly 10,000 people with the CCIM designation in 1,000 American markets and 31 other countries. Canada was its first international market. More than 3,000 practitioners are pursuing the designation, making the CCIM Institute the governing body of one of the largest commercial real estate networks in the world.

“CCIM has been a very important aspect of my real estate career,” said Shindleman, who pointed out that several other Shindico employees have taken CCIM courses, including his wife and brother.

“You get an awful lot of information and education in a reasonably short period of time with the CCIM designation.”

Shindleman has been a senior instructor for the CCIM Institute since 1980, teaching throughout North America, Europe and Asia. He’s also served on the CCIM board of directors and its international affairs committee, and he’s a past president of the CCIM Foundation.

The Susan J. Groeneveld, CCIM, Visionary Award has only been given out six times since it was created in 2006. Its namesake was the first recipient.

To earn the honour, you must be nominated by a minimum of 10 individuals in the commercial real estate industry, including members and staff of CCIM Institute. Nominees must demonstrate the ability to provide leadership and vision that promotes: the CCIM strategic plan; innovation and creativity in projects that support the institute; effective collaboration with CCIM members, staff and other organizations; and involvement with CCIM Institute for more than 10 years, among other criteria.

“I didn’t even know about what’s involved with getting the 10 letters of recognition from people who have to go out of their way to write a story about you, because I’d never thought of nominating someone else,” said Shindleman. “I feel a little bit awkward about that.”

Harvey, who was unavailable for comment, has more than 21 years of experience as a senior instructor for CCIM Institute. He’s taught financial analysis, selling skills and use of software to generate sensitivity analysis. He also received the Cl 104 Senior Instructor of the Year Award in 2004 and 2008.