Simple strategy lifts Avenue Living above $1B in assets

Calgary-based Avenue Living Asset Management began in 2006 with the purchase of 24 rental units in Brooks, Alta., for $3 million. 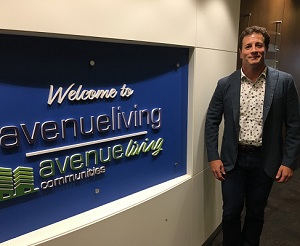 From those modest beginnings, Avenue has authored a phenomenal success story in just 12 years; today it has 320 buildings in its portfolio, just over $1 billion in assets under management in three investment vehicles, 7,350 multi-residential units, 440,000 square feet of commercial space and 20,000 acres of agricultural real estate.

The company’s success is due to a simple business model: Buy mid-market multi-residential properties. Add value to them through renovations and improved management. Increase rents and income.

“It came from nothing,” said Anthony Giuffre, who co-founded Avenue Living with his brother Dr. Michael Giuffre and Carl Diodati, and serves as its CEO today.

“We bought our first asset. It was about 100 miles from Calgary. To and from every single day. We managed it ourselves because every dollar counted. And we did the value-add. We retro-fitted that particular asset. . . . Within six months, we had achieved a significant amount of NOI (net operating income).”

In the wake of that first purchase, they sought similar opportunities in other smaller markets. The next place they landed was Lethbridge, and Avenue grew from there as it started focusing on consolidating in Saskatchewan in places like Saskatoon, Moose Jaw, Regina and Yorkton.

“What we said is, ‘If we can manage it ourselves and move NOI, we can create real equity,’ ” said Giuffre.

The company today has 303 employees in property management, capital and project management, sales and leasing and maintenance, as well as a dedicated call centre that operates seven days a week.

“We now have 320 rental buildings from that one in Brooks,” said Giuffre, adding the properties are predominantly in Alberta and Saskatchewan with one high-rise in downtown Winnipeg. “We now manage in 17 different centres. What we focus on is opportunity.

“Slowly but surely we’ve been executing that model – 320 buildings, kind of one brick on the wall, piece by piece by piece. It’s taken a long time to get there.”

During its short history, the company rode out two financial crises – the global downturn in 2008-’09 and the recession of 2015 and 2016 in Alberta following the oil price collapse in late 2014.

The company’s strategy has been basically the same as Calgary-based Mainstreet Equity (MEQYF), and its founder Bob Dhillon, which has 11,564 rental suites in 10 cities across Western Canada.

“Over the course of our journey, we took the road least travelled. We never focused on Calgary or Edmonton . . . or any of the major markets. It was always the secondary markets,” said Giuffre. “We’re just entering Calgary. We recently bought . . . about 400-plus units. We’ve now entered Calgary first time ever.

“For the very first time, we saw value in Calgary and we started acquiring and applying our business model here. It’s been a real journey going from that $3 million (in Brooks) to now $1.1 billion.”

Avenue Living strategically focused on launching a major $85-million capital program between 2014 and 2017, renovating the entire portfolio to a new standard of quality and extending the useful life.

In May, Avenue Living reached the major milestone of having $1 billion in assets under management after closing on a 235-unit townhouse acquisition in Red Deer, Alta.

“This achievement is not only a key moment in our company history, it is a significant milestone that establishes us as a sizable presence in the national real estate industry,” Giuffre said in a statement at the time.

Recently, the company raised $110 million in investment in just six months and said the strong investor momentum shows no signs of slowing down, calling it testament to their appetite for alternative real estate investments.

Giuffre a Calgarian, born and bred

Giuffre is a born-and-bred Calgarian and the youngest of seven children in the family.

“I like to call myself not a serial entrepreneur but the consummate entrepreneur,” said Giuffre. “Ever since high school, I was involved in my own mini businesses. Grew up in the family business which was transportation, storage. We had moving companies. My father was a lifelong entrepreneur as well. Ninety-one years old and still has an office here. Comes to work every single day. The fruit doesn’t fall far from the tree.

“Just really good roots when it comes to hard-working, hard-driving individual. Learned a lot. Started working with him at a very young age. Probably 14-15. I’m now 45 years old. It’s one of those things that it’s all I’ve ever known.”

Giuffre received a BA from the University of Calgary and took every business course he could.

In the early part of his entrepreneurial career, he was in the restaurant business and the re-manufacturing of appliances.

He eventually ended up in real estate when one of his siblings, who was a realtor, asked Giuffre if he could fill in for him while he was away on holidays. It was then that Giuffre got his real estate licence. And it was then that he chanced upon Diodati, one of his brother’s clients. That connection led to a business partnership and eventually Avenue Living.

“Carl has a real panache for math and systems and economics – macro and micro. As do I. I love numbers and finance and that sort of thing. Carl and I hit it off right away. We went from interfacing as a realtor/client relationship to inevitably (him) coming on with me,” said Giuffre.

Avenue Living believes there is great opportunity in the markets it currently serves, which contain about 225,000 rental units. With recent economic factors including the uptick in oil prices, higher interest rates and changes in government mortgage policies, the outlook for buoying rental markets is positive in 2018, said Giuffre.

He said Avenue Living anticipates significant growth momentum beyond the $1-billion milestone, and the company intends to leverage these positive market conditions in its continued growth strategy.