Skydevco, the new real estate development division of the Skyline Group of Companies, plans to bu... 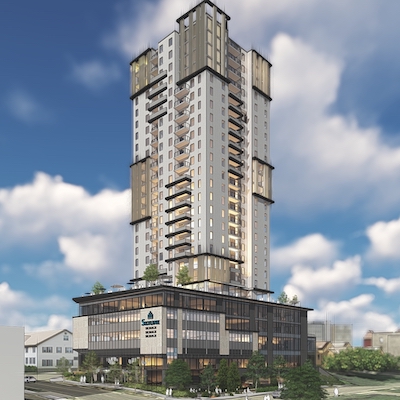 Skydevco, part of the Skyline Group of Companies, plans to develop this 25-storey multi-use tower in Guelph. (Courtesy Skydevco)

Skydevco, the new real estate development division of the Skyline Group of Companies, plans to build a 25-storey mixed-use development in downtown Guelph that would be the Southern Ontario city’s tallest building.

The proposed $75-to-$100-million development would be built at 70 Fountain St. E. and 75 Farquhar St. – the current site of a Skyline corporate office.

It would include 180 rental apartments on 20 floors, 70,000 square feet of office space on three floors, 4,000 square feet of ground-level retail space and 207 underground parking spaces on four levels. It would also house Skyline’s head office.

The Guelph development is part of an “expansive” plan by Skydevco, which launched in early 2019, to build 2,000 rental apartments in secondary markets in Ontario, Skydevco president Greg Jones told RENX. In addition to Guelph, rental apartments are planned for Peterborough, Tecumseh near Windsor, Welland, Collingwood and Gravenhurst.

“We’re looking to build thousands of rental apartments in Southern Ontario and Ontario,” Jones said. “It’s a needed housing choice for the province.”

If all goes well, construction of the Guelph development would begin in 2023 and be completed in 2025.

Skydevco (also known as SkyDev) has submitted an application to the City of Guelph to amend its zoning and official plan to allow for the mixed-use development to go ahead.

In advance of city council meetings on the development, SkyDev is holding a voluntary public open house on the project Jan. 9 at the Old Quebec Street Shoppes in downtown Guelph.

The meeting’s goal is to inform the public “on what we’re doing differently and what this could mean for the city,” Jones said. “I think this project will bring more people riding transit and also more people shopping, living and working in the downtown core.”

He expects young professionals and empty-nesters will be the primary audiences for the rental apartments, which will range from about 650 square feet for one bedroom to 750-800 square feet for two bedrooms.

Designed by Guelph architect T. Allan Sage and built in 1955, the existing building façade has heritage significance due to its international style of modernist architecture, Jones said.

Rental apartments would rise above the office podium and there would be a narrow 7,104-square-foot floor plate, about half the width of other buildings in the area including Tricar’s recently built River Mill and Riverhouse condo developments.

The “skinny” look makes for “an architecturally superior design” that reduces shadows and is visually appealing, Jones said. “We think it can be an icon for Guelph.”

The development would be located adjacent to Guelph Central Station, which provides VIA Rail, GO Transit, Guelph Transit and Greyhound bus access, making it “a true pedestrian-oriented development,” Jones said.

“This is a great place for density. It’s an opportunity to build 180 homes plus office on a half a hectare piece of land. This is smart growth and I’m happy to be a part of it.”

The building at the development site houses some of Skyline’s corporate offices. Once construction begins, employees would move into the Skyline-owned 130 Macdonell St. in downtown Guelph, a 130,000-square-foot building that currently houses the head office of The Co-operators Group insurance company.

The Co-operators, which has three more years on its lease in the building, will move into its own new headquarters outside downtown Guelph.

Jones said the new SkyDev development would be the most sustainable building of its kind in Guelph and one of the most efficient buildings in Skyline’s portfolio.

“One of the neat things about being a rental housing provider is that we have a long-term view on ownership,” he said. “We model these buildings over 25 years, so we’re able to do things that pay off over a long period such as solar panels.”

About 10 per cent of the estimated energy consumption at the development would be produced onsite through solar panels on the rooftops and building walls.

“We’re trying to hit efficiencies beyond the building code because the environment and the economy are not mutually exclusive for us. We find that these initiatives are good for investors and good for our occupants.”

The parking area would have transportation demand management measures including transit passes, car-sharing spaces and time-of-day sharing between uses.

Twenty per cent of parking spaces would have electric vehicle charging stations and there would also be bicycle storage rooms and shower facilities.

There would also be one level of indoor amenities, as well as rooftop amenities above the office podium.

In November, SkyDev received zoning approval from the City of Peterborough to build about 250 rental apartments in five buildings ranging from three to 11 storeys near the Peterborough Lift Lock national historic site at a cost of about $70 million.

It will be built at  Hunter Street and Armour Road on the site of an under-utilized parking lot in the back of Time Square, a Skyline-owned  and operated  complex with about 210 rental apartments and 70,000 square feet of office space.

Time Square is located in the former Westclox clock factory.

Among SkyDev’s other planned developments are two four-storey apartment buildings in Tecumseh that would house more than 140 rental units.