Slate Office REIT (SOT.UN-T) believes in asset concentration in markets it likes, and the Highway 427 corridor in Etobicoke, Ont. is its latest focus. 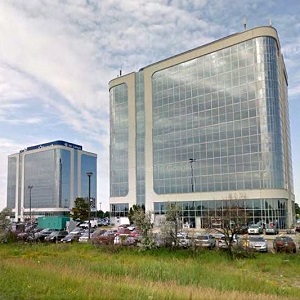 Two of the three buildings at the West Metro Corporate Centre in Toronto. (Google Streetview image)

“Being able to offer a variety of leasing solutions to prospective tenants allows us to capture as much of the leasing market as possible, and having multiple buildings in a node means that you have access to the best market intelligence available.

“Additionally, there are some economies of scale as it pertains to management.”

Both were purchased from Dream Office REIT (D.UN-T) and Dream Hard Asset Alternatives Trust, which considered them non-core assets.

Dream Office REIT announced a strategic plan last year that targeted selling at least $1.2 billion of non-core assets it believed would realize attractive pricing and enable the REIT to concentrate on its highest-quality properties.

“We were attracted by the opportunity to acquire quality assets at a compelling price,” Antoniak said of Commerce West and West Metro Corporate Centre. “Both assets were acquired at prices considerably below replacement costs, which allows us flexibility on the operations and leasing side going forward.

“We are very familiar with the 427 corridor node and believe that the market fundamentals will continue to strengthen in the future. These are high-profile assets located along a major transportation route in the GTA, which adds to the quality of the REIT’s portfolio as a whole.”

Commerce West is a class-A complex with 411,842 square feet of space spread across two mid-rise office towers connected through a single-storey commercial corridor. It’s 87.2-per cent occupied by tenants that include Parmalat, Trader Corporation and Livingston International. Commerce West’s rents are 12 per cent below market value.

West Metro Corporate Centre is a three-building complex with 616,364 square feet of space. It’s 93-per cent occupied by multiple tenants, including SNC-Lavalin and The Bank of Nova Scotia. It’s Slate Office REIT’s largest property and SNC-Lavalin is now its largest tenant.

“As with all our acquisitions, we will evaluate any and all opportunities to add value to both properties,” said Antoniak. “There are some projects we are likely to undertake in the near term that we think will contribute to our leasing efforts and, as a result, create value over the longer term.”

The two recently acquired properties join Slate Office REIT’s existing nearby four-storey, 91,238-square-foot building at 1 Eva Rd. that recently underwent a significant renovation and upgrade to the exterior and facade, along with the lobbies and common areas.

“We are always looking for acquisitions that are consistent with our objectives and that will add value for our unitholders,” said Antoniak. “We will continue to pursue opportunities in the same diligent manner that we have throughout our history.”

“We’re pretty much the lone consolidator for non-trophy assets in Canada,” he said. “Part of the effectiveness of our strategy is that we cast a really wide net over urban, suburban and some cross-markets across the country.

“We have a very defined investment criteria. We’re looking at assets with low replacement cost, with rents below market.”

Slate Office REIT is a division of Toronto-based Slate Asset Management, a real estate owner and operator with a presence across Canada, the United States and Europe. It has completed more than $7.5 billion of acquisitions and dispositions while raising more than $1.5 billion of equity and approximately $4 billion of debt.