Slate Asset Management is moving into the Canadian multi-family asset class with Toronto’s Junction House and two other planned developments. 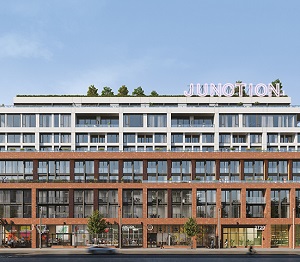 “We believe that many, and perhaps most, dense and growing urban markets operate at a continual housing supply deficit because of their land use constraints,” said Slate vice-president of development Brandon Donnelly. “That creates a market opportunity and an immediate need for new supply.”

Multi-family is seen as a natural extension for Slate and will become a growth sector as part of the company’s city-building ambitions, according to Donnelly.

“We believe that design innovation and a diversity of uses are fundamental to improving our cities. Residential is an important driver for much of the development we are seeing today. This specialization allows us to complement our proven track record with office and retail real estate.”

Junction House and the mixed-use One Delisle, near the intersection of Toronto’s Yonge Street and St. Clair Avenue, are both condominiums. A purpose-built rental component will be part of a mixed-use development planned for Hamilton’s Corktown neighbourhood. Slate wants to continue to develop both types of assets.

“It is extremely difficult to buy multi-family residential in Canada, and the vast majority of the stock that is available is dated,” said Donnelly. “We’re seeing a strong market opportunity for both tenures.”

Toronto-based Slate is a global real estate investor, asset manager and developer that was founded by Blair and Brady Welch in 2005. It has more than $6 billion in assets under management across Canada, the United States and Europe, with $1 billion in development projects underway.

Junction House, designed by Canadian architectural firm superkül and local interior design firm Dialogue 38, is located at 2720 Dundas St. W. The nine-storey building will have 144 one-, two- and three-bedroom suites ranging in size from 500 to more than 1,500 square feet. Prices start in the $400,000s. Its lobby will double as a co-working space and it will also have a gym.

“With Junction House, we wanted to figure out how the single-family home experience could be replicated in a multi-residential building,” said Donnelly. “That’s why we created our two-storey ‘House Collection’ of suites.”

Junction House is currently in the registration phase and occupancy is scheduled for the end of 2021.

“Junction House came about simply because we love the neighbourhood and many of us at Slate spend our free time there,” said Donnelly. “We also look for projects in walkable urban neighborhoods that are located in close proximity to transit.

“We believe that Bloor and Dundas West, near where Junction House is located, is one of the best, if not the best, connected mobility hubs in the city, after Union Station. Many people don’t appreciate that the Union Pearson Express also operates as an express rail service within the city.

“It only takes seven minutes to get to Union Station from the Bloor and Dundas West intersection.”

One Delisle, the uniquely designed first Canadian project for Chicago-headquartered Studio Gang, is planned to rise 48 storeys with 263 suites and small-scale ground level retail at the southwest corner of Yonge Street and Delisle Avenue. The façade of 1498 Yonge St. will be retained as part of a two-storey base that will be topped by eight-storey elongated hexagonal modules pieced together in a honeycomb pattern.

The Delisle Parkette on the east side of the site will be redesigned and expanded by 50 per cent.

Various underground parking garages of existing buildings will be combined and reorganized into one large garage, allowing for the removal of two of the five existing parking entrances and the coordination of underground loading and services. This should also help create a more pedestrian-friendly environment at street level.

Slate already owns 10 properties in the area, including buildings at all four corners of Yonge and St. Clair, but One Delisle will be the first it will build from the ground up.

“One Delisle really emerged as a result of the other work we’re doing at Yonge and St. Clair, and the presence we have there,” said Donnelly.

“We came across an underutilized corner, and that effectively led to the creation of our development practice. We plan to be at Yonge and St. Clair forever, and so from the outset we knew we had to propose something truly special.”

Slate hosted a pre-application community meeting in the neighbourhood over the summer that was attended by more than 300 and featured a presentation from Studio Gang founder Jeanne Gang. Slate filed a rezoning application in July and is working through it with the City of Toronto and the community.

Slate plans to develop a full city block in downtown Hamilton’s Corktown neighbourhood, just south of the GO Transit station. The plan calls for a two-tower, mixed-use project with retail and residential and an enhancement of the pedestrian experience in the broader area.