Soaring vacancy rates and plunging leasing costs in Calgary’s downtown office market have opened the door for many companies to set up shop in the core – an opportunity they would not have had when the city’s economy was booming. 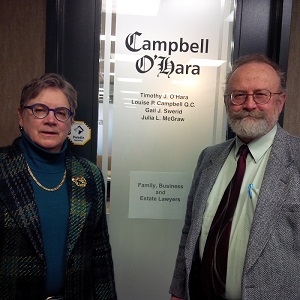 “It’s not that you’re not able to (move downtown). It’s that when oil was at $100 (per barrel), it was a bad business decision to try and compete with the oil companies for the space. It’s not like you couldn’t physically afford it. It became disproportionate from a business standpoint,” says Timothy O’Hara, who with partner Louise Campbell, moved their law firm office from the Beltline in late August to just a few blocks north across the railway tracks into the heart of the city.

Campbell O’Hara leased 4,000 square feet in the core. The difference in rent amounted to about $5 per square foot less than if they had renewed in their previous space.

“In the past, it was substantially more expensive to move three blocks north. Now it’s backwards. They wanted more money to go to the Beltline than downtown. I thought they were out to lunch on this one,” says O’Hara.

“Physically being downtown helps. You run into people. You get connections. You have lunch with them. You run into them in the Plus 15s (skywalk). It’s really, really good for business that way.

“For a law firm, we’re two blocks from the courthouse. Almost every other law firm we regularly deal with is in a four-block radius. It’s very convenient.”

Joe Binfet, managing director/broker with Colliers International in Calgary, says the high vacancy downtown has opened the door to suburban tenants looking to relocate to the city’s core.

“There is a sense that rental rates will not get any lower and there is a window of opportunity to explore a downtown location,” says Binfet.

“Landlords are courting tenants with inducements such as free rent and tenant improvement allowances in an effort to attract companies to their buildings. Parking can still be a challenge for tenants looking at a downtown location but the current climate in terms of rent and availability can make the core a viable alternative.”

According to Susan Thompson, research manager with Avison Young in Calgary, the overall vacancy rate in the downtown was 25.7 per cent in Q3 2017 – a direct result of the plunge in oil prices beginning in late 2014 which resulted in thousands of layoffs and a recession in 2015 and 2016. In the third quarter of 2014, before the economic downturn, the vacancy rate was 6.2 per cent.

The elevated vacancy rate has had a dramatic impact on rental rates. Avison Young research indicates the average gross rent has dropped from $43.73 per square foot in Q3 2014 to $29.46 in Q3 2017 – a nearly 33 per cent decline.

Thompson says the lowest vacancy rate on record for downtown Calgary was the second quarter of 2006 at 0.3 per cent. At that time, the average gross rent was $40.80 per square foot.

“The attraction for small businesses to be strategically placed in a downtown environment makes a lot of sense and it hasn’t been an option for a lot of them in the past in Calgary,” says Deana Haley, vice-president, client services for Calgary Economic Development.  “One reason more small businesses are looking at space downtown is that landlords are doing more to accommodate them with things like shorter lease terms and different approaches to floor plates that allows them to share buildings with larger companies.

“A lot of the entrepreneurs in Calgary are people from the energy sector who are highly sophisticated businesspeople and they have the networks – clients, vendors, future partners and investors – in the downtown core where those collisions that lead to business opportunities happen so they want to be there.”

Stacy Christensen, principal of Group2 Architecture Interior Design, says the company could not have afforded to move into the core in the past as it would have been “a lot more painful.”

However, recently the company also made the move from the Beltline to the core, finding 5,000 square feet in the historic Burns Building, right across from City Hall and the Olympic Plaza. A few months free rent and tenant improvements paid by the landlord was an added bonus.

She says the move has a number of advantages including proximity to City Hall and the LRT line. Many amenities like restaurants and coffee shops are also nearby.

“We have a lot of consultants that are close by so we can just walk to their offices or they can walk to ours . . . clients as well. We have a number of clients that are right downtown so they can just hop onto a train or just walk over. It really is quite handy in terms of getting around, seeing people and avoiding the huge parking costs in Calgary,” explains Christensen.

“A couple of years ago, this wouldn’t have even been considered,” says Gigliuk.