The town of Crossfield – about 30 minutes north of Calgary – has long been an agricultural hub be...

The town of Crossfield – about 30 minutes north of Calgary – has long been an agricultural hub best known for its rolling prairie and Rocky mountain views. 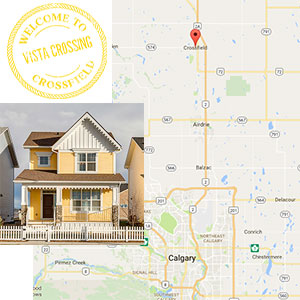 It’s a rural community that like many others across Canada have stagnated for many years as growth has largely favoured major centres.

Yet a new residential development aims to reverse this trend.

Vista Crossing by Dream (DRM-T), a developer with deep roots in both Calgary and Saskatchewan, marks a new departure for the town of about 3,500.

What’s more is Dream is likely ploughing fertile ground building in a previously overlooked small town farther afield from a large metropolitan centre, says a professor at the Haskayne School of Business at the University of Calgary.

The Calgary region is far more than the city itself,  says Jyoti Gondek, director of the Westman Centre for Real Estate Studies at the university.

“There are a lot of urban satellites like Airdrie, Cochrane and Chestermere,” she says.

“One of the big things about the Calgary region is we don’t just have the city as the sole urban location,” says Jyoti Gondek, director of the Westman Centre for Real Estate Studies at the university.

“There are a lot of urban satellites like Airdrie, Cochrane and Chestermere.”

All of these municipalities have grown to the point where they’re “now acting as employment hubs that definitely feed into” the viability of developments like Vista Crossing, she adds.

Dream has been working in this segment for some time, including Montrose in High River — another community within a short drive to Calgary west of the city.

“We were impacted by the flood, so we’re doing a relaunch there,” says Trevor Dickie, vice-president for Dream. referring to the flash flood in 2013 that destroyed many homes in the community.

Addresses a need for rural families

“I can’t say who is going to live in this community that Dream is building, but certainly individuals selling their agricultural properties are looking to stay near the Crossfield area because that’s where their roots are.”

But Dream will also cater to buyers working from home who want to live a short drive to the big city. The big draw in this respect is Crossfield will have a fibre optic link by summer.

“So we have super high-speed access that will be connected to every house in Crossfield where you get incredible bandwidth in your home 10 times faster than anything you can get in Calgary,” Gondek says.

At full build-out in about eight years, the town will see its population double thanks to the master planned community of detached homes, townhouses, parks and walking trails on about 160 acres of land all within about five minutes of Crossfield’s downtown.

More importantly, the town is in close proximity to Airdrie — a key economic driver behind the new development, says Dickie. “Crossfield is really a unique situation because it functions as a satellite suburban community to Airdrie.”

Dream envisions Crossfield as the next potential Airdrie — a city that bumps up against the northern border of Calgary. “Twenty years ago, Airdrie had a similar profile to Crossfield,” says Dickie.

“For the reasons people moved out to Airdrie 20 years ago, you get the same sort of mindset that is driving people to consider moving out to Crossfield,” he says.

For one, life is a quieter with a slower pace.

More for less in a new home

And then there’s the price. New homes in the community will offer more for less for the buyer who might be kicking tires in Airdrie or in Northeast Calgary.

“There have been a lot of changes with (federal) mortgage rules where somebody who would basically look to the Airdrie market to get into a single-family home, and now they’re able to only afford a townhome,” he says.

Chief among those changes, making home buying more expensive, is the mortgage stress test that stipulates buyers must be able to carry a mortgage at the Bank of Canada’s five-year posted mortgage rate.

This is often much higher than what is offered by lenders, including the big banks, so first-time buyers’ dollars get them less than they could a year ago.

The first phase of Vista Crossing features 150 units that are a mix of lane product and starter homes, beginning from $299,000,” he says.

Dickie, who expects interest to heat up in the next few months, says small-town developments are now on Dream’s radar as much as urban areas.

“Whether that’s high-rise condos to a bedroom community, we try to work on where the market fundamentals are headed,” he says.

And Crossfield seems to be heading in the right direction.