Smaller markets are an intriguing and profitable option for some apartment building investors as land and building prices in many major Canadian cities become too expensive. 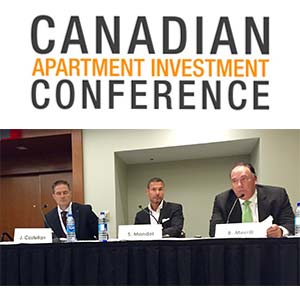 “There’s a certain amount of infrastructure that exists in those towns that we found worked for us, and we avoided going to the markets and having to use institutional money,” said Skyline Group of Companies co-founder and chief executive officer Jason Castellan on Sept. 7 at the Canadian Apartment Investment Conference at the Metro Toronto Convention Centre.

“That’s how we grew the portfolio and now we’re expanding into other provinces as well. We have more than 16,000 units in our portfolio and we’ll keep chipping away and finding one-off properties one-by-one and aggregating our portfolio.”

Skyline started in Guelph, Ont., moved into nearby cities Kitchener, Waterloo and Cambridge, and now owns apartments in several other secondary and tertiary markets in Ontario as well as in Quebec, Alberta and British Columbia.

The smallest town Skyline has invested in is Hensall, Ont., with a population of 800. Castellan said it took some convincing of investors to purchase an apartment building for $25,000 a unit. After making improvements, the property was sold for $45,000 per unit and Skyline made a profit.

In addition to making physical improvements to buildings it purchases, Skyline also tries to provide a cultural lift by making them places where people want to live and feel engaged.

“When you go into these smaller communities, you’re an outsider,” said Castellan. “Unless you win them over, they’re going to treat you like an outsider.”

Castellan calls Skyline “the institutional owner for everyday investors.” A lot of its investors are locals who understand their small markets because they live there.

Privately held Skyline Apartment Real Estate Investment Trust purchased 23 rental properties with 1,685 units in Windsor, Ont. for $136.2 million from Calgary-based Boardwalk Real Estate Investment Trust last summer. The city of more than 200,000 across the border from Detroit qualifies as a large market in the REIT’s portfolio, and Skyline is now the dominant landlord in the city. It owned more than 300 units before the Boardwalk deal.

“We like the market,” said Castellan. “We like the challenges that go with it and we like the fact that it went under the radar for a long, long time.”

Centurion Apartment REIT initially focused on secondary markets and now owns interests in a portfolio worth more than $1 billion that’s comprised of more than 5,377 rental units in 45 separate apartment properties located in 16 Canadian communities. It recently started focusing more on new construction in smaller markets where there may be a shortage of new buildings.

“It’s so difficult to find things to buy today,” said Centurion president and chief executive officer Greg Romundt. “The only way to do it without blowing your brains out on price is to build it yourself or work with partners to build it.”

Romundt said you can only take older buildings so far, and people will always be attracted to new things. He added that there’s a lot of interest in new construction in such Ontario cities as Kitchener, Cambridge, Waterloo, Bowmanville, Guelph and Niagara Falls because the financial numbers can work better there by building low-rise, wood-frame apartments as opposed to riskier concrete high-rises where land is more scarce and expensive in Toronto.

Merrill cited Parkdale, which was once ridden with crime, drugs, prostitution and rundown rooming houses but has gone through a transformation that’s still ongoing that has gentrified the neighbourhood and introduced new stores, restaurants and bars. Several apartment buildings that were built in the area in the 1960s are now being purchased and repositioned, and MetCap has been one of the most active companies in this respect.

To illustrate how much Parkdale is changing, MetCap purchased its first building there for $65,000 a unit and paid $170,000 a unit for its most recent acquisition in the neighbourhood just west of Toronto’s downtown core.

MetCap also seeks opportunities in secondary markets because, if you have the biggest and best building in a small community, it can be an advantage and drive pricing. While dealing with small town contractors can sometimes present challenges, Merrill said inspectors in these communities often don’t apply as much pressure as they do in large cities and are more willing to work with owners.

“That helps with your ability to plan and manage your capital. As a private entrepreneur, you’re not getting jammed with unexpected expenditures on large capital items.”