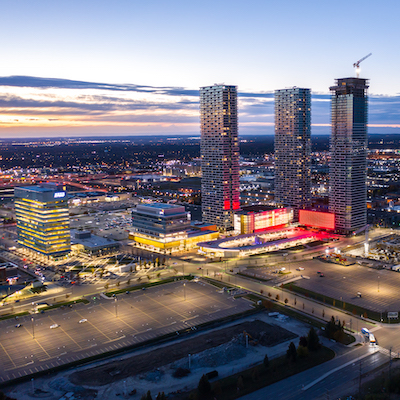 SmartCentres REIT (SRU-UN-T) will pay $513 million to acquire a two-thirds interest in 53 acres of property at the massive Vaughan Metropolitan Centre (VMC) development just north of the City of Toronto, the trust has announced.

The property is part of the SmartVMC development, a 100-acre master-planned city centre which is being developed at the VMC, along Highway 7 at the terminus of the city’s TTC subway line.

“These 53 acres represent the most strategic property in the country for SmartCentres REIT,” said Mitchell Goldhar, executive chairman and CEO of SmartCentres, in the announcement. “With 45,000 people expected to ultimately call SmartVMC home, it is the jewel in the crown of SmartCentres’ portfolio.”

Goldhar’s privately owned Penguin Group of Companies owns the remaining 33.33 per cent of acquired lands, which will extend the SmartCentres/Penguin partnership to own the entire 105-acre SmartVMC City Centre. The transaction is scheduled to close on Dec. 31 and will make SmartCentres the largest property owner at the VMC.

The property is being acquired from an unnamed third-party vendor, a SmartCentres spokesperson wrote in reply to an email question from RENX.

“This is truly a unique situation. It is not every day a company can be involved in building an entire downtown,” Goldhar said in the announcement. “SmartVMC is at the confluence of $3.5 billion in public transportation infrastructure, including the TTC’s new Vaughan Metropolitan Centre subway station, connecting the site directly to downtown Toronto. While it may be difficult to imagine now, in time this will reveal itself as a new benchmark for modern living in our city and beyond.”

The city centre property has permissions in place for multiresidential, condominium, seniors’ residences, office, retail, recreational, entertainment and other uses.

SmartCentres and the Vaughan Metropolitan Centre

SmartCentres is heavily involved in the VMC site, recently announcing the formal kickoff of construction of Phase 1 at its latest development, known as ArtWalk. The first phase includes three towers of 38, 18 and six storeys as well as retail at ground level.

It is also the developer of the Transit City 1 and 2 towers, 55-storey multires buildings and a mixed-use 225,000-square-foot tower anchored by PwC’s offices.

Tuesday’s announcement says merging the two parcels of land allows for “the unleashing of creativity and maximizing of synergies, such as environmental sustainability, open space connectivity, renewable energy, and recycling management.”

The site will provide residents, workers and visitors with access to Highways 400 and 407, as well as Highway 7, the Vaughan Metropolitan Centre University line TTC subway station, a VIVA bus terminal and York Region bus terminal.

The remaining $313 million is to be funded from debt facilities and cash on hand.

SmartCentres Real Estate Investment Trust is one of Canada’s largest fully integrated REITs, with a portfolio featuring 168 properties in communities across the country.

SmartCentres has approximately $10.2 billion in assets and owns 33.9 million square feet of income-producing retail space with 97.6 per cent occupancy, on 3,500 acres of owned land.

The REIT plans and develops connected, mixed-use communities on its existing retail properties.

Project 512, a $13.1 billion intensification program ($7.8 billion at SmartCentres’ share) represents the REIT’s major development focus on which construction is expected to commence within the next five years.

The intensification developments consist of rental apartments, condos, seniors’ residences and hotels under the SmartLiving banner, and retail, office, and storage facilities under the SmartCentres banner.