SmartREIT and its chairman Mitchell Goldhar have plans for a new class-A office building in the Vaughan Metropolitan Centre (VMC), with professional services firm PwC Canada as the lead tenant. 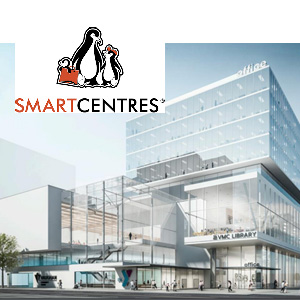 “Construction will begin early next year and is expected to be completed by Q4 2019,” said SmartREIT chief executive officer Huw Thomas, who added that the building will target LEED certification.

VMC is the new downtown of Vaughan at Highway 400 and Highway 7. It will include a subway station connected to downtown Toronto as well as a new VIVA rapidway and York Regional Transit main bus station.

“It will have eight storeys,” said Thomas. “The YMCA and library will be on floors one to three, PwC will be on four, six, seven and eight. Floor five is open at this point.

SmartREIT owns 53 acres of developable land around the new subway station in a 50/50 joint venture with Goldhar, and together they plan to develop approximately eight to 10 million square feet of commercial, residential and retail space. The joint venture is developing its lands as part of a 100-acre master-planned development, with the remainder of the land owned by Goldhar in partnership with others.

This 100-acre master plan around the new subway station is expected to comprise approximately 17 million square feet of mixed-use space and a nine-acre park. The VMC subway stop, the most northerly in the Greater Toronto Area, has been delayed but is expected to open in late 2017.

Vaughan is already amongst Canada’s fastest growing communities and, given the existing and future transportation infrastructure in combination with a healthy job market and low tax rates, the VMC development has huge potential for the region.

“The City of Vaughan from the mayor on down has been very supportive of the development and we are in regular contact with the City as we develop our master plan,” said Thomas.

SmartREIT, which acquired SmartCentres last year, released its second quarter results last week. Its adjusted funds from operations increased by 27.4 per cent to $88.9 million and net operating income increased by $20.9 million compared to the same quarter in 2015.

The occupancy rate was 98.2 per cent. SmartREIT had two Target store locations in its portfolio and, as a result of Target’s decision to leave, the REIT has identified both of them for redevelopment. Thomas was pleased with the final settlement that SmartREIT reached on the two properties and said the money will give it multiple years of flexibility in releasing space to new tenants.

SmartREIT has a portfolio of 141 principally Walmart-anchored retail properties, eight properties under development and one office property that had a combined value of $8.24 billion as of June 30.

“VMC is just one of a number of potential sites that SmartREIT is working on,” said Thomas. “Others include the StudioCentre site on Eastern Avenue, just east of the Don Valley, which is a mixed-use site supporting the film and digital media industry and already includes the very active Revival 629 film studios.

“Westside Mall on Eglinton, which is a redevelopment site including a new LRT station and links to a new GO station, will be built in the coming years. And finally there’s the planned expansion of the highly successful Toronto Premium Outlets at Trafalgar Road and Highway 401.”

SmartREIT is a joint venture partner in the Toronto and Montreal Premium Outlets shopping centres with Simon Property Group.