Creative workspace company Spaces has big plans for Montreal, beginning with the May 22 opening of its 30,000-square-foot location in Mile End. 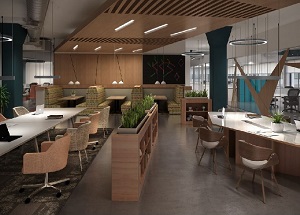 “The Mile End area has been growing exponentially over the past five years,” said Spaces executive vice-president Wayne Berger, noting the neighbourhood is vibrant both day and night due to its cafes and restaurants. “The area has become the destination for technology and emerging businesses.”

Spaces will have the seventh floor of the Allied Properties REIT (AP-UN-T)-owned, loft-style building at 5455 De Gaspé Ave., where video game publisher Ubisoft is the largest tenant. Berger said Spaces would like to work with Ubisoft if it develops a need for further space in the 12-storey, 492,590-square-foot former textile factory built in 1973. The building has 150 underground parking spaces.

Spaces will feature collaborative areas, team rooms, co-working space, fully equipped meeting rooms, private offices and a café serving beverages, breakfast and lunch items. It can accommodate 300 people and will host networking, business and educational events for both members and the general public.

While Berger said he couldn’t disclose further details, there are plans to open five Spaces locations offering 250,000 square feet of creative workspace in the Greater Montreal Area within the next two years.

“We are looking at continuing to grow in the traditional core of Montreal, as well as the suburbs, and in new and emerging markets like Griffintown, Little Burgundy and other areas.”

“They built and designed an outdoor co-working facility that provides an open-air environment for startups, entrepreneurs and freelancers to come and work,” said Berger.

While the free service operated for a month last summer, this year it opens today (May 17) and will continue until mid-September. It’s anticipated that 50,000 people will work there as well as attend conferences, festive evenings and other activities over those four months. Spaces will allow Aire Commune members to use its Mile End facility for free on rainy days.

“We’re very excited about it because we believe our values are very much aligned with each other,” said Berger, who added that Spaces would like to extend its partnership with Aire Commune if it expands.

Other Spaces locations in Canada

Spaces has 92 locations in 25 countries around the world and is looking to aggressively grow the brand in Canada. It opened its first facility at 180 John St. in downtown Toronto last November and will launch another one at 99 Yorkville Ave. on Aug. 20.

Spaces will open its first Vancouver location on July 17 at 151 W. Hastings St. in Gastown. It will be followed by facilities in the historic five-storey Tom Lee Music Building on Granville Street and in Mount Pleasant in Great Northern Way Campus in November.