Edmonton’s Sparrow Capital is a real estate investment firm with a mission. The firm seeks operators (tenants) for its projects who enhance the cultural fabric of neighbourhoods or whose work is meaningful to the future of the regional economy, says company president Antoine Palmer. 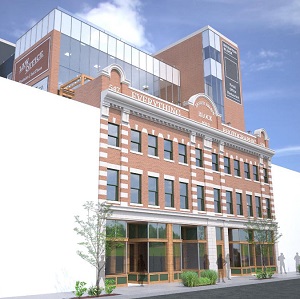 “On the community side, we think of gathering places, community hubs, culinary, entertainment, arts,” says Palmer.

On the regional economy side, he adds, are the visionary entrepreneurs the region needs to be relevant in the 21st century; entrepreneurs who are involved in exponential technology, changing energy demand and machine learning.

Sparrow is run by three principals: Palmer, Jarrett Campbell and Jim Huth. It represents what the company’s website calls “a collective of community-oriented investors.”

“(They are) a whole bunch of people who kind of get what we’re up to and who have seen us perform and trust in our integrity and ability to develop projects well and manage them well.”

* The Gibbard Block is a 106-year-old, red brick building in Edmonton’s leafy Highlands neighbourhood. It needs plenty of structural improvement and redesign. The cost will be about $4 million, including the $1.6 million purchase price, the cost of construction and tenant improvement allowances. The plan includes a new restaurant and some retail on the main floor, offices on the second floor and micro-suites on the top floor, which will likely be operated as a bed and breakfast.

“We have lots of options if the B&B is lacking in occupancy,” says Palmer. “We can turn it into long-term units. We believe we can get very close to the provincial-municipal definition of affordable housing without grants by innovating on small footprint residential.”

* The Brighton Block is a historic and key building in the city’s Quarters area, a rundown part of the city core on the cusp of rejuvenation. The building was open to the elements for two years and is now being gutted and rebuilt behind the Edwardian facade. Sparrow Capital has joined developer Primavera Developments as an investor in the project, which aims to house retail and office space and a show-stopping patio on the top of the building with views out to the North Saskatchewan River valley.

“Brighton is incredibly well-positioned to be a really important asset. But for us, the whole point is it’s something to do today to get over the inertia that’s holding the Quarters back,” says Palmer.

* Sparrow also plans to close a deal in September on an 18,000-square-foot light-industrial building north of MacEwan University. The plan is to establish a commercial food production collaborative facility with eight to 10 commercial kitchens and space for retail and to host events. The project, so far dubbed the “food building” by the developer, will be operated by a pair of established entrepreneurs who will have a number of small subtenants requiring kitchen facilities.

The food building would allow small start-up local food processors to scale up production and will house businesses at various stages of sophistication.

“This project is right in the middle of the spectrum, between enhancing the cultural fabric and primary economic productivity,” says Palmer.

Grew out of Boring Investments

Palmer says Sparrow has about $20 million invested in those three projects. There is another $40 million in commercial assets between his portfolio and that of Jim Huth. The rest of the portfolio is in multi-family residential.

“We have about a quarter billion in assets under management between all of us as principles,” says Palmer.

“The bulk of it is still Boring (Investments) stuff we were doing before,” he says, referring to the evolution of Sparrow Capital from a more conventional firm.

Boring Investment relied on the basics: net operating, cap rates, sensible cash flow buffers and conservative leverage on assets, and the holdings were designed to be resilient to economic volatility.

“But then we started to buy some buildings that met the criteria under the Boring model, but were actually pretty neat properties that were relevant to the surrounding neighbourhood,” says Palmer.

The Westmount building on 107th Avenue was an example of that.

A “butt ugly” building built in 1961, the envelope of the commercial building was drywall, studs and pressboard covered in tar and layers of newspaper, with that covered in diagonal slats and brown metal tin. Sparrow redid the facade in 2014, modernized the electrical and mechanical to improve the building and increase its revenue.

But for Palmer the key opportunity was the restaurant operator in the Westmount building. RGE RD is one of Edmonton’s best restaurants, landing on “best-of” lists nationwide, and a beacon in the city’s now-thriving restaurant scene.

“The best part of the whole project is we got to help RGE RD double their footprint. They expanded into the neighbouring space — now it’s like the ideal layout for them. That was very fulfilling to me.”

Boring Investments rebranded in 2016 as Sparrow Capital took on its more activist role.

Palmer says Sparrow is seeking ways to help entrepreneurs get over the threshold of being able to commit to five- or 10-year leases.

“Sometimes working with them means working with an unusual tenant improvement allowance . . . we have that mechanism, within certain restraints, to help fill gaps in the capital stack of the operator …

“Another thing we can do, and it’s something we’re doing right now in our portfolio, is we can bring in other competent operators that are already plugged into our ecosystem and say, ‘Hey, you have this problem solved and you have this gap and let’s bring you two together. If you can resonate, you can partner and together you constitute covenant.’