The people behind Spire Development have large ambitions. 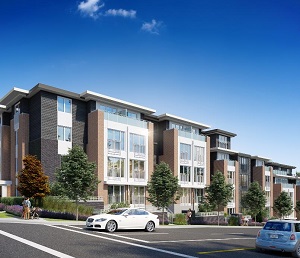 The Delta B.C.-headquartered developer has been carving out a niche in the Lower Mainland with projects such as an exclusive condo building in the south Granville neighbourhood, car washes with $10-million construction price tags and Vancouver’s largest, multi-unit, Passive House apartment building.

When Spire first got started, it focused on building industrial warehouses and business parks, said Lawrence Green, the firm’s president and co-founder. He joined forces with Pete Rackow to launch the firm about 11 years ago.

“We’re kind of like the little engine that could,” Green said.

“We have been very active in (industrial) all through our career,” he told RENX in an interview. “With the lack of industrial land (in Metro Vancouver), what we’ve had to do is expand our horizons a little bit. We’re into retail now, office developments, mini-storages and car washes.”

The company’s most recent project, Spire Landing, is one of its most interesting. It’s a six-storey, purpose-built, 95-unit rental apartment building in Vancouver at 57th Ave. and Fraser Street.

The project, set to complete this winter, marks the developer’s first foray into multi-family residential development.

“Surveying the market, there are so many skilled developers in Vancouver on the residential side,” Green said.

As a result, Spire wanted to create something progressive and memorable. A Passive House apartment fit the bill. “They’re super energy-efficient,” he said, likening the design concept to that of an “European castle.”

“When it’s blazing hot outside, (it’s) cool inside,” he said. “Or in the winter, you only have to add a little bit of heat to maintain the temperature of the building inside.”

The cost to build a Passive House is higher than a traditional building, but it’s worth it in the long run.

“The final product is much superior in terms of air quality, noise reduction, and carbon footprint,” Racknow said in a recent prepared statement.

“With the city’s support, we now have the perfect opportunity to revolutionize the rental experience for Vancouverites, especially given our current housing crunch.”

Green said Spire has a waiting list of more than 200 people for the 95 units.

“It’s the uniqueness of the project that allowed us to move into residential and carve a little bit of niche for ourselves,” Green said.

He said the roof of the building has just been completed.

“Very soon we’ll start putting in windows and then we’ll do a pressure test,” he said. “The pressure test is basically what will get us the certification for the Passive House. That means the building is airtight.”

The building meets the specifications of Vancouver’s Rental 100 program, which encourages buildings made of 100 per cent rental units. The policy waives the development cost levy, eases parking requirements, relaxes unit size and allows for more density beyond the existing zoning criteria.

“There is a massive demand and a need for quality rental product in the Lower Mainland,” Green said. “It’s one of those areas where there are city initiatives and programs that can help out in the timing of getting the product to market.”

“We are absolutely going to do more of it,” he said. “Every project we look at now on the residential side we are looking at from a Passive House perspective first. It is amazing technology and I think it’s been a wonderful experience to learn new things.”

Another of Spire’s recent acquisitions is a site at 2968 Birch Street in the south Granville neighbourhood. It is putting up a 7,000-square-foot luxury condo building, which includes a 2,365-square-foot penthouse.

“It’s a five-storey condo building, where there are only four units,” Green said. “Every floor is a unit with the exception of the penthouse, which is two floors, and it has its own private elevator.”

Green said they’ve also started to focus on high-end self storage and car washes. Storguard Self Storage and Shine Auto Wash hired Spire to build a three-storey 82,000-square-foot storage building and a 17,500-square-foot car wash on Gilley Ave. in Burnaby. They completed that project in 2015 and finished a similar complex for the same client last year in Coquitlam.

“These car washes are $10 million construction projects,” he said. “They’re super high-tech and very intricate, and we’ve carved out another little niche for ourselves there.”

Meanwhile, the team is expanding along with the project list. Spire recently announced the addition of Doug Nordan as the director of assets and development.

Spire’s team and portfolio were maturing to the point where it needed Nordan’s experience, Green said.

“Doug and I have had a lot of experience together (with past projects) so when he became available, Pete and I had to scoop him up right away.”